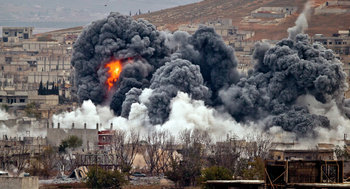 The last year of the presidency of Nobel Peace Prize laureate Barack Obama was marked by heavy bombing throughout the Middle East and South Asia. The United States dropped at least 26,171 bombs in seven Muslim-majority countries in 2016. And, given limitations on available government data, this estimate is “undoubtedly low,” according to the Council on Foreign Relations’ Micah Zenko and Jennifer Wilson, who conducted the research.

Syria, Iraq, Afghanistan, Libya, Yemen, Somalia, and Pakistan were the countries targeted by U.S. airstrikes. 2016 saw an increase in bombing since 2015, when the U.S. dropped at least 23,144 bombs on six Muslim-majority countries (Libya was the seventh country bombed in 2016).

Most of the bombs, 24,287, used in 2016 were dropped in Iraq and Syria, where the U.S. is leading a coalition to fight the self-declared ISIS. Afghanistan was hit with at least 1,337 bombs. The war in Afghanistan entered its 15th year in 2016, one of the longest standing wars in U.S. history. President Obama was reelected in 2012 on the promise to end the war in 2014, but he prolonged and even expanded it multiple times.

Another 496 bombs were dropped by the U.S. in Libya. The U.S. quietly launched an air campaign in the oil-rich North African country in 2016 in order to beat back ISIS terrorists. NATO carried out a regime change operation in Libya in 2011, toppling the government of longtime leader Muammar Qadhafi and plunging the nation into chaos.

The U.S. also carried out dozens of airstrikes in Yemen, Somalia and Pakistan, three countries where the U.S. has carried out covert drone wars for years. Hundreds of civilians have been killed in drone strikes in these countries, according to a conservative estimate by the Bureau of Investigative Journalism. The Obama administration released a report in July claiming just 64 to 116 civilians have been killed in its drone assassination program, but experts say this is a gross underestimate.

Share
Previous Europe must boost efforts to save refugees dying of cold: UNHCR
Next Book ‘Lessons from Quran’ translated into Russian