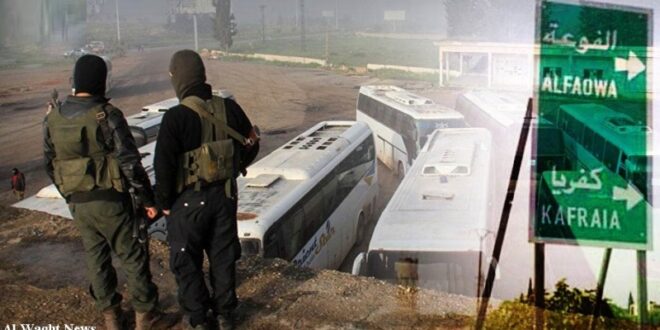 Right on the heels of the recent Syrian army’s successes in its anti-terror push in the Eastern Ghouta in the capital’s suburbs, terrorist groups such as al-Nusra Group and Tahrir al-Sham began since last week mortar and rocket attacks on the two Shiite towns of al-Fu’ah and Kafriya in northern Idlib province. The attacks on the civilians of the two besieged towns are not new and are meant to press the Syrian government to ease the pressure on the Ghouta front.

Right on the heels of the recent Syrian army’s successes in its anti-terror push in the Eastern Ghouta in the capital’s suburbs, terrorist groups such as al-Nusra Group and Tahrir al-Sham began since last week mortar and rocket attacks on the two Shiite towns of al-Fu’ah and Kafriya in northern Idlib province. The attacks on the civilians of the two besieged towns are not new and are meant to press the Syrian government to ease the pressure on the Ghouta front.

Reports suggest that the shelling has been so intense that the residents of the two towns had to abandon their homes and seek shelter in the surrounding farms to save lives. According to the reports from the local sources, over 170 mortars have targeted the two regions.

The schools also have not survived the attacks which inflicted heavy harms but left no human casualties.

On the other side, the Russian fighter jets launched several attacks on the terrorist positions in a bid to relax the rocket pressure put on al-Fu’ah and Kafriya. Initial reports suggested heavy casualties sustained by the armed groups, with 45 terrorists reportedly dead, including 13 field commanders of al-Nusra Front.

Al-Fu’ah and Kafriya are among the Idlib’s oldest areas. Al-Fu’ah has 15,000 and Kafriya has 35,000 residents. The two towns, only 10 kilometers separating them from northern Idlib and majorly inhabited by the Shiite Muslims, went under full blockade of the terrorists since March 2015, when the terrorist groups seized Idlib in northwestern Syria. Ever since, the towns have come under regular rocket and mortar attacks. The people are living in hard conditions and receive food and medical aids through air sent to them by the government’s planes. Al-Nusra takfiris repeatedly committed heinous crimes against the defenseless civilians in the blockaded towns mainly because of their Shiite roots.

Fuel is highly scarce there and people largely rely on firewood to bake bread and cook food and also keep warm. The transportation system is fully down in the towns due to lack of gas and diesel and in many cases, the people use carts and animals to carry their goods. The people there are now accustomed to the hand-made rockets fired from the terrorist-held areas. People complain about the shortage of medical services including urgent vaccines. Local outlets assert that many patients are not treated due to lack of necessary medications. Roughly, every family in the two towns has seen one member or more killed, injured, or kidnapped by the terrorist groups.

After losing Aleppo city to the government forces, the armed groups concentrated on saving Idlib as a precious play card. Idlib shares borders with Turkey. They need the city to move between the Syrian and Turkish territories. Al-Fu’ah and Kafriya are only 30 kilometers away from the Turkish borders. When the al-Nusra started their aggression to fully seize Idlib, the terrorists were faced with firm resistance of the two towns’ people. The Wahhabi muftis supported by the al-Nusra issued fatwas legitimizing the terrorists’ crimes against the civilians there.

Now the Syrian government has restored 52 percent of the Eastern Ghouta in the suburbs of the capital Damascus which have been held by a range of terrorist groups since 2013. Following Ghouta developments, the militants have grown concerned about a possible push to put strains on them in the villages surrounding a-Fu’ah and Kafriya once Ghouta operation is accomplished. Just last month, one of many villages around the two towns was liberated by the Syrian Arab Army from the terrorists.

Al-Nusra Front has the strategy of sporadic and guerrilla attacks to frustrate the Syrian army’s operations. Another strategy takes advantage of the civilians. Al-Nusra uses the residents of the villages in the vicinity of al-Fu’ah and Kafriya as human shields in the face of assaults of the government forces. So, recapture of these villages will mount to failure of one of their combat strategy. As they repeatedly insist, by long-term blockade of the towns they hold a trump card that helps them bargain for time and reorganize forces in the confrontation of the Syrian government.

Glaringly apparent, the civilians there are held as hostages to press the Syrian government to act in accordance with the terrorists’ demands. Whenever al-Nusra and its branches somewhere lose the edge to the Syrian army or feel a pressure, they resort to firing hand-made rockets on al-Fu’ah and Kafriya in hope of wresting concessions from the central government.

For example, according to a deal, dubbed Four-towns Agreement reached in Mach 2017 by pro-government forces and terrorists, 8,000 civilians from the besieged towns were planned to be evacuated in exchange for evacuation of encircled anti-government armed fighters. The resistant groups in the towns handed over arms to the terrorists as the accord specified. But the buses carrying the people were denied exit at the checkpoints by the terrorists. Before that, a deal that was planned to pave the way for 3,000 civilians to leave the two towns had also collapsed.

The blockade is now three-years-old, but the US and other Western countries and even the international organizations mainly under the Western influence have so far declined to raise their voice in solidarity with the ill-fated al-Fu’ah and Kafriya people just because they support the government and refuse the country’s foreign-designed partition plot.

Last month, the Western and Arab media as well as Western-dominated international institutions embarked on a propaganda campaign for saving al-Nusra, Tahrir al-Sham, Jaysh al-Islam, and Faylaq al-Rahman which went under central government’s encirclement in Eastern Ghouta. The outcome was United Nations Security Council’s emergency meeting, called for by Britain and supported by the US and France, and passing a ceasefire resolution. The same governments, media, and institutions have so far closed their eyes to the daily suffering of the civilians who are struggling for life amid the rain of terrorist rockets. In April 2016, France, backed by Britain and the US, called on the UNSC to hold an emergency session to break Madaya in Damascus suburbs but never mentioned the severe blockade on the two Shiite towns.

Cases of this kind are abundant during seven years of the Syrian conflict. The West chose to remain silent over last year’s al-Rashideen massacre. An Ahrar al-Sham suicide bomb killed 118, mainly children and women, and injured 250 of the evacuees coming from al-Fu’ah and Kafriya and heading to al-Rashideen neighborhood of Aleppo. The massacre was first given publicity by people on social media that made Western media found it inevitable to cover the story seriously. There is a notion that Syria split plan determines the US reaction or silence on the war-hit country’s developments. The Americans ordinarily express worries and react when the Syrian army makes gains on the battlefields.