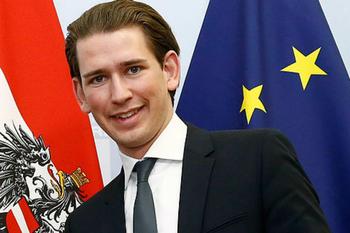 Austria’s Minister for Foreign Affairs and Integration Sebastian Kurz said on Friday he wanted to ban public servants, including school teachers, from wearing the Islamic headscarf.

Kurz, of the Christian Conservative People’s Party (OVP), is working on a draft law with Muna Duzdar, a junior minister from the OVP’s senior Social Democrat coalition partner who has an Arab family background and is Muslim.

If passed by parliament, the nationwide ban would be stricter than laws in France, where only the full body veil is illegal, or Germany, where the highest court in 2015 restricted lawmakers’ scope to ban teachers from wearing the headscarf.

“Because there (schools), it’s about the effect of role models and the influence on young people. Austria is religion-friendly but also a secular state,” Kurz said, according to a spokesman.

An adviser to the European Court of Justice (ECJ) said in March companies should be allowed to prohibit staff from wearing the Islamic headscarf but only as part of a general ban on religious and political symbols.

Kurz is revamping Austria’s integration laws and would also like to include a ban on full body veils and restrictions on the distribution of the [holy] Quran by Salafist Muslims, Kurz’s spokesman said.

A spokeswoman for Austria’s most prominent Muslim group, IGGIO, noted that discrimination in the workplace on religious grounds was illegal in Austria and said: “After such a statement, trust is badly shaken.”

She said such a ban would send the wrong signal, not least because working women wearing the headscarf could help overcome deep “patriarchal prejudices”.

Duzdar also expressed that a person cannot be discriminated against in the workplace on the grounds of their religion and said she wanted to wait for a final ECJ ruling on the issue before sending the law to parliament.

“I’m open to discussions about this but in reality one cannot pick individual religions. If you discuss religious dress and symbols, you have to speak about all religions. We work on a dialogue with all religious communities,” she said.

The coalition has not set a deadline for the draft to be finished.

In a hardening of her stance on migrants’ integration in Germany, Chancellor Angela Merkel last month called for a ban on full face veils “wherever legally possible”.