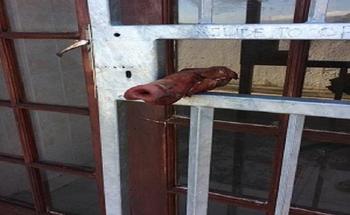 In a whatsapp message, a representative from the mosque said: “Some terrible news. This morning after fajr (morning prayers) a pig’s nose and blood was left on the Simon’s Town mosque’s door.”

MJC member Imam Fuad Samaai, who lodged a case of crimen injuria with the police, said the pig’s blood and snout were found outside the mosque early Saturday.

He suspects it was placed there overnight.

“It is an insult and shows total disregard and lack of respect to a world religion. It insults our Muslim commu- nity.” He said it degraded the sanctity of a place of worship. He said that the mosque is one of the oldest in South Africa.

In Islam the pig is considered haraam (not permissable) to consume.“We are of the opinion that all religious sanctuaries must be preserved. In this case it is an attack on an entire community and a place of worship.”

He said the constitution states that everybody is entitled to the right to religious freedom. Samaai said the MJC believes in peaceful co-existence. “We are not going to incite people to violence. People in Cape Town are generally tolerant of each other’s religion.”

Simon’s Town, he said is one of Cape Town’s oldest Muslim communities. “They work together as a community.”

He said people must let the law run its course and that the MJC plans to take the matter to the Human Rights Commission.

MJC deputy president Moulana Abdul Khaliq Allie, said: “We condemn this particular incident. We are calling on our community to remain compliant and we hope the authorities will bring the perpetrators to book.”

“The incident is offensive and criminal,” said Allie. He stressed that people must not retaliate. Reverend Gordon Richard Oliver of the Cape Town Interfaith Initiative said they also condemned the incident.

“We condemn this act in the strongest terms. We also offer our deepest concern and compassion to the Muslim community of Simon’s Town. This seriously offends all that is good and noble in human kind. It offends the basic values of all religions.”

He said people should have respect for all religions. But he adds that religious tolerance in Cape Town is highly valued. “It is very rare that these kinds of acts happen in Cape Town. We hope this doesn’t happen again.”

Police confirmed that the incident took place and that a case of crimen injuria has been been lodged at the Simon’s Town police station and the matter is being investigated.

“I think its a crime the (sic) no one is sanding (standing) up to those muslim bastards (sic) blaring their call to pray 5 times a day over massive speakers. Why do i need to put up with an Arabic tradition created in the dessert (sic) thousands of years ago. Stand up for yourselves !!! Burn it down!!!”

According to media reports he has since submitted a formal apology.