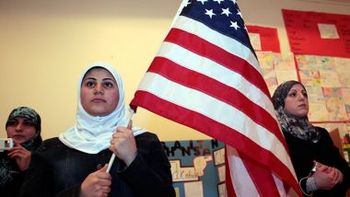 American Muslims have been preparing for their holiest holiday, Eid Al-Adha, which is celebrated from the 10th of the Hijri month of Dhul Hijjah after the sighting of the crescent moon and that could fall this year on September 11.

The Director of the New York Chapter of Muslim Public Affairs Council Dalia Mahmoud fears the coincidence could provoke a backlash on the Muslim community, CBS New York news reported.

“It will be important for us to just be cognizant and cautious in the environment we are in. It is a political year. There is unfortunately a fair amount of Islamophobia,” she said.

“It’s a mixed feeling, joy with sadness. Joy because of Eid, holiday, and stuff like that, but at the same time sadness. It’s a very sad event,” Yusuf Ibrahim told CBS2 TV News Reporter Fatima Rahmatullah.