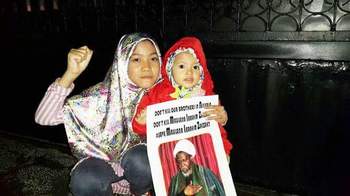 The general public and members of the International Community will recall that on the 14th day of December 2015, the Nigerian Military invaded the house of Islamic Movement leader, Shaikh Ibraheem Zakzaky, and fatally wounded him and his wife, and killed his three children among so many hundreds of members of the Islamic Movement in Nigeria (IMN).

It will also be recalled that this invasion was sequel to the so called “clash” between the Military and the members of the IMN that resulted in the killing of over 1000 of our members and their being criminally buried in a mass grave between the 12th and 14th December 2015.

As a peaceful organization we demanded for the release of our leader and his wife from detention. This we have continued to demand through all known peaceful and legitimate means. Rather than release our leader, the Department of State Services (DSS) claimed that our leader was being held in “protective custody”.

Subsequently, our leader briefed his solicitors and solicitors of the Islamic Movement in Nigeria led by Femi Falana, SAN; Festus Okoye Esq and Maxwell Kyon Esq to proceed to the Federal High Courts Kaduna and Abuja and enforce their fundamental right to personal liberty, freedom of movement and association.

The Legal Team filed the said cases on the firm instructions of our leader and the Islamic Movement and the cases are pending in Court and the Department of State Services (DSS), the Kaduna State Government and the Nigerian Military have put up appearances in both matters in Kaduna and in Abuja.

Since the filing of the two matters in Court and arising from the withdrawal of our Legal Team from further appearance before the Judicial Commission of Inquiry set up by the Kaduna State Government to investigate the matters, the Department of State Services (DSS) has denied our Legal Team further access to the leader of our Movement despite several repeated requests both orally and in writing.

Unfortunately, on the 29th day of July 2016 or thereabout, and ubsequently, one Bello Ibrahim and one Sadau Garba who claimed to be solicitors to the Islamic Movement and to our revered leader, on the instigation and active connivance of the Department of State Services (DSS) wrote a letter to the Director General of the Department of State Services titled “Appreciation over medical care given to Shaikh Ibraheem Yaqub Zakzaky by DSS and a humble request to release him for the review of the treatment abroad to be taken by his family”

In the said letter, the two solicitors acting at the behest of the Department of State Services claimed that the DSS saved the life of our revered leader by giving him what they called the best medical care. They also claimed that our revered leader is appreciative of his treatment in detention and on the basis of that called on the Department of State Services to allow the families take him out of the country for further medical care.

The said Sadau Garba and Bello Ibrahim who claimed to be Barristers and Solicitors wrote the said letter dated 29th July 2016 to the Department of State Services without the knowledge of the Islamic Movement in Nigeria and the Movement only got to know of the said letter and its contents after it was submitted. There are indications that there were subsequent letters written by them to the Department of State Services, and in fact the Movement does not know how many letters they have been instigated to write and never authorized the writing of any of the said letters.

We recall that the said Sadau Garba has in the past attempted to swerve the course of the case involving Shaikh’s fundamental rights by claiming that that Shaikh told him that the DSS should be excluded from the matter as one of the respondents in the case which turned out to be contrived by those that briefed him.

We want to make it abundantly clear that:

·         The said Sadau Garba and Bello Ibrahim are not solicitors to the Islamic Movement in Nigeria and have not been briefed by our leader to represent him in any of the cases pending in court.

·         The said Sadau Garba and Bello Ibrahim are acting a script carefully contrived by those holding our revered leader and their claim to being our solicitors and that of our leader is baffling, erroneous, and mischievous and amounts to professional misconduct.

·         The two solicitors wrote letters to the Department of State Services in utter secrecy and without consultation with the solicitors of the Movement and our revered leader.

·         They two solicitors tricked some few individuals to believe that once they have written the said letters apologizing to the DSS and thanking them for their so called efforts in taking care of our leader, he will be set free.

·         The two solicitors who are no doubt solicitors to the DSS have been used and are still being used by the Department of State Services to further or strengthen the case of DSS that Shaikh is being held in “protective custody” and with his consent.

·         The said dubious letter written by the two solicitors was further meant to show the World that Shaikh “appreciates” his detention by the DSS, thereby humiliating him.

·         Shaikh did not brief them to write the letters and never approved the writing of the dubious letters.

The Islamic Movement in Nigeria therefore makes it abundantly clear that Femi Falana, SAN is the leader of the Legal Team and ably assisted by Festus Okoye Esq and Maxwell Kyon Esq.

The Islamic Movement in Nigeria further affirms that anybody or any individual that deals with any other person other than the above mentioned solicitors does so at his or her own detriment.

We demand that our Leader and the wife must be released unconditionally without delay. It will be a tragedy of monumental proportions should our leader go blind in detention or suffer further physical disability due to him being denied access to adequate medical attention. We understand those that sanctioned his detention and those detaining him want to humiliate him and make sure that he goes completely blind before he is eventually released thereby rendering him powerless the moment he is released from unconstitutional and illegal detention.

The health of our leader and the wife continues to deteriorate on a daily basis and those holding him in custody are playing politics with his detention and that of his wife.

We urge the Nigerian people and the international community to intervene in this crude violation of the fundamental rights of our leader. The Nigerian constitution and laws do not sanction detention without trial. We still insist that our leader should be taken to court if those holding him believe that he has committed any offence known to the laws of the Federal Republic of Nigeria, otherwise he must be released forthwith.