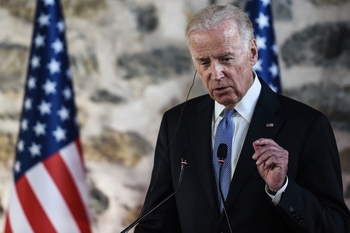 US vice president expresses concerns about developments in Bahrain

According to a statement released by the White House on Friday, Biden voiced “strong concerns regarding recent negative developments in Bahrain” during a phone conversation with Bahraini King Hamad bin Isa Al Khalifah on Thursday.

Biden also “emphasized the importance of reducing ongoing tensions through dialogue and reconciliation with the opposition, and a commitment to reform,” the statement added.

On June 14, Manama suspended the country’s main opposition group, the al-Wefaq National Islamic Society. The United Nations, along with other international organizations, expressed concern, saying the move could escalate the situation in the country.

The group’s Secretary General Sheikh Ali Salman has been in prison since December 2014 on charges of attempting to overthrow the regime and collaborating with foreign powers, which he has denied. A court sentenced him to four years in prison in June 2015.

On June 20, the Al Khalifah regime also revoked the citizenship of Bahrain’s leading Shia cleric, Sheikh Isa Qassim, with the Interior Ministry accusing him of seeking the “creation of a sectarian environment” through his connections with foreign powers. The ruling, however, drew widespread condemnation at domestic and international levels.

In another development on Wednesday, Bahrain’s prominent human rights activist, Nabeel Rajab, was returned to prison from hospital despite his worsening health condition.

The Al-Khalifah regime is engaged in a harsh crackdown on dissent and widespread discrimination against the country’s Shia majority in the past couple of years. Scores of people have been killed and hundreds of others injured or arrested in the island state, which is a close ally of the US in the Persian Gulf region. Bahrain has also seen a wave of anti-regime protests since mid-February 2011.

In March that year, troops from Saudi Arabia and the United Arab Emirates were deployed to the country to assist the Bahraini regime in its crackdown on peaceful protests.