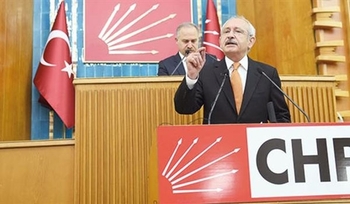 All three opposition parties in the Turkish parliament harshly criticized the government for the recent Ankara-Tel Aviv deal, which ended a six-year dispute between Turkey and Israel.

Opposition parties on Tuesday blasted Recep Tayyip Erdogan’s recent back-to-back reconciliation with Israel and expression of regret over the downing of a Russian jet by Turkey.

On Monday, Israel and Turkey announced they would normalize ties after a six-year rupture caused by the killing of Gaza-bound Turkish activists by Israeli forces.

Hours after the announcement, Moscow said the Turkish head of state had “apologized” to Russian President Vladimir Putin in a letter over the shooting down of a Russian aircraft near the Syrian border back in November 2015.

Turkey, however, later said it had not “apologized,” saying it had expressed regret and condolences with the family of one of the pilots of the jet who was killed in the incident.

Slamming the normalization agreement, Kemal Kılıcdaroglu, the head of the main opposition Republican People’s Party (CHP), asked, “How can you sign such a deal?… Are you with your country, with justice or with those Israeli soldiers who killed [Turkish citizens]?”
“Turkey faced an action [by Israel, which was] suitable for a pirate state,” he added, expressing further wonder at the rapprochement.

Figen Yuksekdag, the co-chair of the Peoples’ Democratic Party (HDP), also said the most crucial item of the deal with Israel was selling “Palestinian” natural gas to Europe.

“They are making a deal to market what belongs to orphan children in Palestine,” she said. “They are selling the words that they call ‘sacred’ at another bargaining table.”
Nationalist Movement Party (MHP) head Devlet Bahceli, meanwhile, said the deal sharply contrasted Erdogan’s stiff criticism of Israeli aggression in the past.

“The president had repeatedly accused Israel of being a terror state. Israel was killing Gazan children on beaches. Erdogan was rightfully criticizing this heavily. He said Israel even surpassed Hitler in barbarism,” he said. “This means that the government has been meeting with Israel for years secretly and we were not aware of this.”

Kılıcdaroglu and Yuksekdag also vented anger at the expression of condolences to Moscow over the downing of the Russian jet, which Ankara said had violated Turkish airspace near Syria.

“Who breached our border? The Russians. Who set the rules of engagement? We did it, and we declared it to the whole world.”

Yuksekdag said Erdogan had apologized for the downing of the jet but was pretending to have only offered an expression of regret.

Share
Previous American journalist: Israel the Master of Racism and Dehumanization
Next US vice president expresses concerns about developments in Bahrain