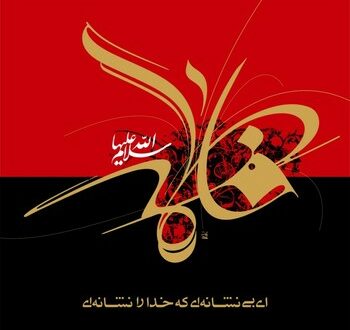 In all times, dowry, trousseau and the wedding ceremony were the three difficulties placed before families in the matters of life, with the traces of its rain of adversity remaining with the couple until the end of their lives.

Sometimes verbal deputes and quarrels, and sometimes bloody fights were created as a result of these matters. And what wealth has been wasted because of our imitation of one another and tasteless, childish rivalry.

Still, even now, the sediments of these ignorant thoughts are not few in those who speak of Islam.
But, the trousseau of the Lady of Islam must, just as her dowry, be a model for all.

This might surprise you but, the Prophet (S) ordered that Ali’s armour be sold and the money brought to him, which amounted to about 500 Dirhams.

The Prophet divided this money into three parts. one part he gave to Bilal to buy a nice scented perfume. And the other two parts were put aside for buying clothes and household goods.

It is clear how simple and cheap these goods must have been, to have been bought with such an insignificant amount of money.

In historical records, it has been recorded that the trousseau bought with this money consisted of 18 pieces, of which the most important are listed below;

1 large scarf for 4 Dirhams.
1 piece of dress material for 1 Dirham.
1 bed made of wood and palm leaves.
4 Pillows of sheep skin filled with a sweet smelling grass called “Azkhar”
1 woollen curtain.
1 mat
1 hand mill
1 Leather water-skin
1 Copper wash-tub
1 Large container for milking
1 Large Green-colored earthen pot (pitcher) and so on.
This was the trousseau of the Lady of the world’s women.
The Wedding Ceremony

The honourable Prophet of Islam (s.w.a.), in this ceremony, which was for the establishment of a family, and by which an important part of Islam’s history was changed, and of which the pure successors of the Prophet (S) would all come into existence; executed such a program that his enemies became angered and his friends made proud! Also causing those who were distant to Ponder upon it.

“Umm Salamah” and “Umm Aiman”, who were two virtuous women of Islam, and had great affection for the great Lady Fatimah Zahra (s.a.), came to the Prophet of Islam Saying: “O’ honourable Prophet of God! Indeed, if Khadijah were alive she would really be happy with the convening of Fatimah’s wedding ceremony, Isn’t that so?”

Tears came into the eyes of the Messenger of God (s.w.a.) upon hearing the name of that devoted Lady, and he began remembering all of the Kindness and generosity of Khadijah, saying: “Where can a woman be found like Khadijah?

Those days when all of the people denied me, she confirmed me, placing all of her wealth and life in my hands for spreading of God’s religion. She was the very Lady whom God ordered me to inform that an emerald castle will be granted to her in the exalted Heavens.

Umm Salamah, when she heard this, saw the inner revolution and burning of the Prophet and said: “O’ Messenger of God! My parents be your sacrifice! Whatever you say about Khadijah is the truth; but at any rate, she welcomed God’s invitation and has rushed to the vicinity of His Mercy. Hopefully, God will house her in the best place in Heaven.

But, the matter for which we have come to your blessed presence is something else, and that being this: your brother and cousin, Ali, wishes you to permit him to take his wife Fatimah to his home, and in this way bring order to his life.”

Ali (a.s.) came and sat before the Prophet (S) but his head was lowered out of shyness.

The Prophet (S) said: “Do you wish to take your wife home?”

Ali, while his head was still lowered, said: “Yes, may my parents be your sacrifice.”

What is interesting is that, contrary to what is usual among those people who worship opulence and who begging planning months ahead of this ceremony, the Prophet (S) happily said: “I will arrange for it either tonight or tomorrow night.”

And right then he gave the orders to arrange for the preparation of a very simple celebration that was full of spirituality and holiness.

As for the formalities of this Heavenly celebration, and its ceremonies, it was conducted so simply and without trouble, that hearing it, is quite astonishing for us these days.

Ali (a.s.) said: A bit of the money from the armour I had sold previously had been given to “Umm Salamah” for safekeeping and during the nuptial ceremony he took 10 Dirhams from her and gave it to me saying: “Buy some Oil, dates, and Kashk with this money. I did this. Then the Prophet (S) himself rolled up his sleeves and mixed these things together with his own hands preparing a meal, serving the people with this very food.

Then he (the Prophet) said “Oh Ali invite whomever you wish”. I left for the mosque where many companions of the Prophet were gathering. I said answer to the prophet’s call. They arose and headed together towards the Prophet. I told the prophet they were a large crowd; he covered the food with a sheet and said: “show them in, ten at a time”, and so I did. The people kept going in, eating and leaving, all the while the food seemed unabated. In all seven hundred men and women ate from that (date and yogurt) dish with the Prophet’s blessing.

It is interesting here that, at the end of the ceremony, when all of the people had returned to their homes and the house became empty, the prophet of Islam placed Fatimah (s.a.) on his left side and Ali (a.s.) on his right, and wished them good luck by spraying a bit of sacred saliva from his mouth on both Fatimah and Ali, Praying for them, saying: “God! They are of me and I am of them. O lord! Just as you removed every kind of filth and impurity from me, also remove it from them making them Pure.” And then he said: “Get up and go home. May God bless both of you.”[28]

The lovers of the material world and the weak believers who are under the influence of material world’s sparkle, who see a family’s respect, honour, and status, and the blessings and grandeur of the wedding ceremony in those back -breaking, oppressive formalities and luxurious articles, should see this and learn a lesson. They should see and get inspiration from this program that is a lesson in humanity and is the substance of the happiness of all boys and girls. And, see an example of Islamic teachings in a living, working way in the events of the “Proposal”, “Dower”, “Trousseau” and “Wedding” of Fatimah Zahra (s.a.) in the pages of history.