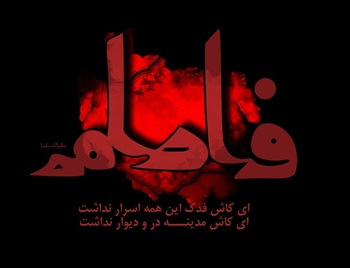 Fadak: the property of Hadrat Fatima Zahra (A.S.)
Fadak is a controversial issue that has since the death of Rasulullah (s) created an open wound between the Sunni and Shi’a schools of thought. The best summary exists from Sahih Bukhari Volume 4, Book 53, Number 325:

The scholors of Ahle Sunnah have fought tirelessly to uphold the decision of Abu Bakr as correct. The reason that they do so is because so much hangs on upholding Abu Bakr’s stance. After all if he is proven wrong then they will have to admit that the Khalifa coined a tradition to justify the usurpation of Fadak from Sayyida Fatima (as). The matter would not just end there it will raise more serious issues such as:

1. The Justice of the Sahaba – If the ‘best friend’ of the Prophet (s) could behave in such an unjust manner what can we expect of the other Sahaba?

2. If Abu Bakr ruled in such an unjust manner then how can he be deemed the rightly guided Khalifa of the Prophet (s)?

3. If hatred for Abu Bakr is a sin then why did Sayyida Fatima (as) hate Abu Bakr until her dying day?

This is why Fadak is such a ‘taboo’ subject for the Ahl’ul Sunnah.The scholars prefer not to openly discuss it with their followers, if they are ever forced to do so they present the matter in such a simplified shallow manner, gleaming over facts such as Qur’anic verses, so as to ensure that Abu Bakr comes out of the dispute as perfect as possile.

At the forefront of this attitude are Ansar.org and in their publication “Fadak area between Abu Baker and Fatima” the author Muhammad Al-Khider provided a concise discussion on the topics of Fadak and inheritance. He had sought to counter the wrong things that are said against Abu Bakr on this matter. As far as the issue of Sayyida Fatima (as)’s right to Prophetic inheritance was concerned, Al Khider failed in even citing a word in her favour, on the contrary this advocate of Abu Bakr dedicated his entire efforts on proving that Abu Bakr’s approach was the correct one. He was undeterred even if it meant denying the Qur’an and Sunnah in the process.

Not to be hard done an unknown author of ‘The Issue of Fedek: A rebuttal to common lies propagated against Ahl al-Sunnah regarding Ahlul-Bayt’ advanced all manner of defence to prove that Sayyida Fatima (as) had no claim to Fadak.

Then we have the efforts of the founder of Sipah-e-Sahaba, Haq Nawaz Jhangvi in his article ‘Alleged Row Between Hadhrat Fatimah & Hadhrat Abu Bakr Over Share In Fadak’ whose net conclusion was that Sayyida Fatima (as) was wrong in making her claim. Indeed other articles by the Ahl’ul Sunnah (which we shall highlight) have sought to question the truthfulness and exalted rank of the Ahl’ul bayt (as). They of course were merely following in the footsteps of their early scholars of the likes of al Muhaddith Shah Abdul Aziz and Ibn Taymeeya who wrote vehemently against the concept of Prophetic inheritance. The net conclusion of all these efforts are one that Abu Bakr was correct and the claim that had been brought by Sayyida Fatima (as) was wrong.

We shall present the complete picture from the esteemed works of Ahl’ul Sunnah, and shall analyse the correctness of Abu Bakr’s judgement against the Qur’an, Sunnah and Books of Seerah, Tareekh and Fiqh. Our aim is two fold, to clarify any doubts that are brought up by these articles and to uphold the claim of Sayyida Fatima (as) as correct and truthful. ‘Which party was wrong in this dispute, Sayyida Fatima (as) or Abu Bakr?’ They will need to make the difficult choice, in relation to which side of the fence they wish to sit on. They will have to decide where there affiliations lie.With the School of Ahl’ul Bayt (as) or the School of the Companions.
Sayyida Fatima (as)’s response to the confiscation of Fadak
The Khutbah of Sayyida Fatima (as)

“When Sayyida Fatima found out that Abu Bakr had an intention to confiscate Fadak, She wrapped a cloth around her head, gathered some women from her tribe and went to Abu Bakr. At that time the Muhajireen and Ansar were summoned, a Pardah was made between Fatima and the Sahaba. The daughter of the Prophet sad in a distressed manner, that lead to the Sahaba crying. She after a break praised Allah, sent Salaam on her father the Prophet and said all things on the earth and sky seeks a Waseela to Allah, the Waseela for the people to reach Allah (swt) are us, and Allah’s select people amongst creations are us, and then she introduced herself. I am Fatima the daughter of Rasul and said ‘That which was bestowed to me has been taken, O Abu Bakr, if you are the inheritor of your father, and I am not my father’s inheritor you adopted a wrong means. Then she said to the Muhajireen and Ansar requesting help, O Bani Queela the inheritance of my father has been annexed from me, before your very eyes.

We read in Musnad Ibn Hanbal:

Hadhrat Fatima Zahra became angry at Abu Bakr, and continued assuming that attitude till she died, because she claimed her share in the Prophet’s Estate of Fadak, and Abu Bakr rejected her claim”

We read in Kanz:

“Fatima became angry at Abu Bakr, and never spoke to Abu Bakr until she died”

“Abu Bakr denied Fatima her right and she became angry never speaking to Abu Bakr until she died”.
Sayyida Fatima (as) was so angry at Abu Bakr’s confiscation that she refused to reply to his Salaams

“Hadhrat Umar said to Abu Bakr we have angered Fatima let us go to her and seek her forgiveness. They both went to the house and asked permission to enter. Sayyida Fatima did not grant them this permission. They then went to ‘Ali and spoke to him, he allowed them to enter the house. When they sat before Fatima she turned her face away from them, they said Salaams to her but she did not deem them worthy enough to merit a reply”.
Sayyida Fatima (as) said that she would complain about the Shaykhayn before Rasulullah (s) and would curse them in every Salat

“Fatima said ‘When I meet my father the Prophet (s), then I shall’ complain about the both of you (Abu Bakr and Umar), and said to Abu Bakr ‘By Allah I shall curse you after every Salat”.

Abu Bakr made every effort to seek forgiveness after that but it was too late. We read in Mudharij’athul Nubuwwa Volume 2 page 758, Dhikr Meeras al Nabi:
“On one extremely hot day Abu Bakr came to the door of Hadhrat Fatima and said ‘I shall not leave until Fatima is pleased with me again”.

These words serve as proof that the daughter of Rasulullah (s) was displeased with Abu Bakr. Sayyida Fatima (as) still refused to forgive him, since forgiveness is worthless without sincere repentance, neither did he return the usurped land of Fadak, nor did Sayyida (as) forgive him, the option of forgiveness would have only been a possibility had Abu Bakr returned the land. The anger of Fatima (as) towards Abu Bakr never subsided until she died, as is attested by Mullah Qari in Murqat, Sharh Mishkat al Masabih Volume 3 page 453:

“The most difficult issue to convey to readers is the dispute of Fatima al Zahra. To say that Fatima was ignorant with regards to the Hadeeth cited by Abu Bakr, or that she did not concur with the Hadeeth when hearing it, creates difficulties. After all Abu Bakr recited this Hadeeth, and the testimony of the Sahaba upheld this, why did she not accept it and embrace it. If she was angry before the Hadeeth was recited, then why did she remain angry after it was quoted? The displeasure was so extreme that she remained angry with Abu Bakr, never talking to him”.

This serves as the best proof that Sayyida Fatima (as) never changed her position nor forgave Abu Bakr.