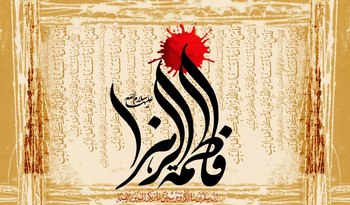 Fatimah (s.a.) had been extolled and praised in the Book of Allah and in the Sunna of His prophet. She was one of the shining suns that undertook the mission of Allah and took on the values, principles and aims of Islam. She struggled for the sake of Allah and in the way of Islam until the last breath.

Her Position in the Qur’an
Many verses had been revealed in the Holy Qur’an praising the Ahlul Bayt (a.s.) at the head of whom Fatimah (s.a.) was. The following are some of those verses:

The Verse of Mawaddah
Allah has said, “Say (O Muhammad, unto mankind): I do not ask of you any reward for it but love for my near relatives; and whoever earns good, We give him more of good therein; surely Allah is Forgiving, Grateful.” 42:23.

In the Qur’an, Allah has imposed the love to the Ahlul Bayt (a.s.) on all Muslims. Narrators said that the “near relatives” mentioned in the verse referred to Ali, Fatimah, al-Hasan, and al-Husayn.

1. Ibn Abbas said, ‘When this verse was revealed, the messenger of Allah was asked, ‘Who are your relatives that you have ordered us to love?’
He said, ‘Ali, Fatimah, and their two sons.’1

2. Jabir bin Abdullah al-Ansari said, ‘One day, a nomad came to the Prophet (S) and said, ‘O Muhammad, offer Islam to me!’

The Prophet (S) said, ‘You should bear witness that there is no god but Allah, Who is One and Only with no partner, and that Muhammad is His slave and messenger.’

3. Ibn Abbas said, ‘When this verse was revealed, some people, in whose hearts there was a disease, said, ‘He (the Prophet) does not want except to make us submit to his relatives after him.’

Gabriel told the Prophet (S) that some people had accused him and so Allah revealed the following verse about them, “Or do they say: He has forged a lie against Allah?” 42:24.

Then, those people said, ‘O messenger of Allah, you are truthful.’3

4. The Ahlul Bayt (a.s.) confirmed that the verse had been revealed about them.

Imam Ali (a.s.) said, ‘The “Ha Mim”4 is about us. It is the verse that no one keeps our love except the believers.’ Then he recited the verse, “Say: I do not ask of you any reward for it but love for my near relatives.”42:235

Imam al-Hasan (a.s.) said in one of his sermons, ‘I am from the Ahlul Bayt (a.s.) whom Allah has imposed their love on every Muslim when He said, (Say (O Muhammad, unto mankind): I do not ask of you any reward for it but love for my near relatives; and whoever earns good, We give him more of good therein). The earning of good is the love to us the Ahlul Bayt (a.s.).’6

When Imam Zaynol Aabidin (as-Sajjad) (a.s.) was brought captive to Yazid bin Mo’awiya in Damascus, an ignorant man came and said to him (Imam as-Sajjad), ‘Praise be to Allah Who killed and uproot you, and cut off the cause of sedition.’

Imam Zaynol Aabidin (a.s.) said kindly to him, ‘Have you read the Qur’an?’

The man said, ‘Yes, I have.’
The Imam said, ‘Have you read the “Ha Mim”?’
The man said, ‘I have read the Qur’an but I have not read the “Ha Mim”.’
The Imam said, ‘Have you not read, (Say: I do not ask of you any reward for it but love for my near relatives)?’
The man was astonished and said to the imam, ‘Are they you?’
Imam Zaynol Aabidin (a.s.) said, ‘Yes.’7
The man left feeling too regretful for the bad word he said to the Imam.

Al-Fakhr ar-Razi said, ‘If this is proved (that this verse concerns the Ahlul Bayt), then they must be glorified and highly revered…there are many proofs leading to this: The first is the saying of Allah (but love to the near relatives…). Definitely, the relation between the Prophet (S) and Fatimah, Ali, al-Hasan, and al-Husayn was the strongest, and this shows that they were his near relatives.

The second is that there is no doubt that the Prophet (S) loved Fatimah (s.a.) when he said, ‘Fatimah is a part from me. Whoever harms her harms me.’ It is also proved by recurrent traditions transmitted from Prophet Muhammad (S) that he loved Ali, al-Hasan, and al-Husayn. Since this is proved, therefore all the nation must do as the Prophet (S) did, for Allah has said, “…and follow him (the Prophet) that haply you may be led aright.” 7:158
and “…therefore let those beware who go against his order lest a trial afflict them or there befall them a painful chastisement.” 24:63
and “Say: If you love Allah, then follow me, Allah will love you and forgive you your faults.” 3:31
and “Certainly you have in the Messenger of Allah an excellent exemplar.” 33:21.

The third is that the prayer for the Aal (near relatives of the Prophet) is of a great rank, therefore, Allah has made it obligatory at the end of tashahhud8, that is to say: O Allah, have blessing on Muhammad and the progeny of Muhammad.’9

The Verse of Abrar
Allah has said, “Surely the righteous shall drink of a cup the admixture of which is camphor. A fountain from which the servants of Allah shall drink; they make it to flow a (goodly) flowing forth. They fulfill vows and fear a day the evil of which shall be spreading far and wide. And they give food out of love for Him to the poor and the orphan and the captive. We only feed you for Allah’s sake; we desire from you neither reward nor thanks.” 76:5-9
Commentators say that the Sura of “hal ata” was revealed about the Ahlul Bayt (a.s.).10

Pages: 1 2 3 4
Share
Previous America: Muslims in St. Louis discuss politics, Islamophobia and getting out the vote
Next Local veterans hold rally in support of Muslims in Boston