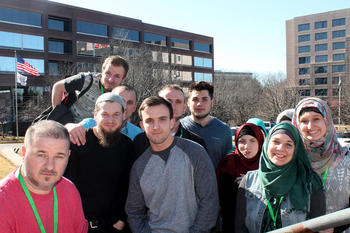 America: Muslims in St. Louis discuss politics, Islamophobia and getting out the vote

While Donald Trump’s pathway to the Republican nomination for president continues to strengthen, some Muslim Americans in St. Louis for a conference on social justice say they’re more concerned about the people who support him.
The Islamic Society of North America hosted the conference in west St. Louis County Saturday, which was attended by about 400 people.

“We’re not so much worried about the candidates themselves but it’s the followers who take their lack of education, their words, and put that into action, into harmful acts and could eventually become something like a shooting in one of our Islamic Centers or a convention like this,” said Alen Kajtezovic, who traveled to St. Louis from Waterloo, Iowa, with a group of young people from his Islamic center.
Two of the conference sessions focused on ways to deal with anti-Muslim sentiment, known as Islamophobia. Islamic leaders in December said St. Louis had seen an increase in anti-Muslim sentiment.
Ghazala Hayat of the Islamic Foundation of Greater St. Louis said Saturday that it’s too soon to say whether much has changed.
“I’m very hopeful that after the election year is over that this will die down but it also depends on the results of the election, where we stand,” Hayat said, adding that many St. Louisans have also shown their support by sending cards and well wishes to her organization.
Azhar Azeez, president of the Islamic Society of North America, said that while a faction of people is working to demonize Muslims he is optimistic that those efforts can be overcome. He extended that analogy to anti-Muslim rhetoric spoken on the campaign trail.
“I personally believe that no one single party, no one single individual can shake the fabric of this nation. Because the values, the ideals of this nation are very deeply rooted,” Azeez said. “I believe our biggest enemy is ignorance. And ignorance leads to prejudice. So if we are going to educate people about who we are then definitely we are going to be able to eliminate this challenge (of anti-Muslim sentiment).”
Azeez and local Islamic leaders are encouraging Muslim Americans to get more involved in the political process to make sure their vote and voice is heard.
“If we are on the (school) boards, if we are on the national level committees, they will hear and then if somebody is making some decision which are anti-Muslim or for that purpose any other group anti, we will be able to speak up and say you know this is not acceptable,” said Hayat.
The Islamic Society of North America has set a goal of registering a million Muslim Americans to vote this year. The Islamic Foundation of Greater St. Louis estimates that about 100,000 Muslims live in the St. Louis area.