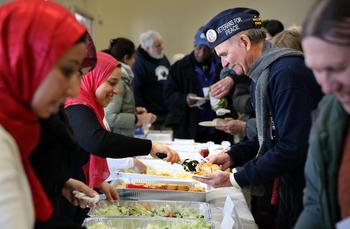 Local veterans hold rally in support of Muslims in Boston

Boston (Massachusetts) – Local antiwar military veterans gathered outside New England’s largest mosque Saturday to show support for Muslims amid growing anti-Muslim sentiments that some believe have been stoked by the inflammatory tone of the presidential race.

The rally at the Islamic Society of Boston Cultural Center in Roxbury was organized by the Smedley D. Butler Brigade of Veterans for Peace and drew about 200 people.

“When you listen to what’s going on in presidential politics there is a lot of misinformation and some people are really misrepresenting what this religion is,” said Bob Funke, a US Army veteran and coordinator for the local veterans group. “They’re using it as a wedge issue and they’re scaring people. It’s the politics of fear.”

Members of the mosque said they were touched by the support.

“Some of the veterans know Muslims and they saw them as good people,” said Tina Serir Abdallah, 38, of Everett. “There’s 1.7 [billion] Muslims worldwide and the majority of us live in peace.”

Supporters of Veterans for Peace carried white and black flags featuring the group’s logo, a white dove set against a combat helmet, and displayed signs reading “Muslims are not our enemy.”

Speakers included leaders from veterans’ groups and Islamic organizations as well as Boston Police Commissioner William B. Evans, who was last to address the crowd.

“We’re all Muslims deep down,” Evans said. “We all yearn for peace.”

Evans also visited the mosque in December after a Muslim couple carried out a mass shooting in San Bernardino, Calif. He said Saturday that Boston police treasure their relationship with the Muslim community.

“I don’t think we can tolerate bigotry toward the Muslim population. They’re an important part of our city,” Evans told reporters Saturday. “I just want to reassure them that we’re here for them.”

Supporters of the movement have attended events for Republican presidential candidate Donald Trump in the early voting states of South Carolina and Nevada to denounce his remarks about Muslims, said Barry Ladendorf, president of Veterans for Peace’s national organization.

He said the group does not take partisan political positions, but objects to comments Trump has made about closing some mosques, requiring Muslims to register in a national database, and keeping open the prison at Guantanamo Bay.

“Hate speech is not acceptable,” Ladendorf said. “We’re not against Trump. We’re against the speech.”

“The torture rhetoric is connected to Islamophobia,” the group said in a statement posted on its website. “Because virtually all of the waterboarding . . . was committed against Muslims, it is our position that the call for continued use of torture is tied to anti-Muslim hate and bigotry.”

After Saturday’s rally, the crowd was treated to lunch inside the center, where some non-Muslim participants observed afternoon prayers. A representative of the mosque answered questions about the building and about Islam.

Yusufi Vali, the center’s executive director, said he was moved by the sight of Muslims and veterans standing together.

“What is this deep disease in our society, in our nation, that is causing the rhetoric that we’re seeing at the national level, at the presidential level?” he asked. “I don’t have the answers for this.”

She said women who practice Islam are often targeted because the hijabs they wear to cover their heads identify them as Muslims to others. Mahmoud said she is cofounder of Mercy to All Mankind, a nonprofit Islamic outreach group.

“We really appreciate that someone is standing up during this time to reflect what’s right and stop bigotry,” Mahmoud said. “It takes a lot of courage and bravery.”

She said she was once singled out by a man who made an obscene gesture at her while she was at an intersection with her three children.

“I didn’t even do anything,” Mahmoud said.

Armida Commesse, 36, of Foxborough, said she appreciated the veterans’ willingness to learn about her religion.

“It’s like breaking walls down,” she said. “My heart is just so filled with love.”