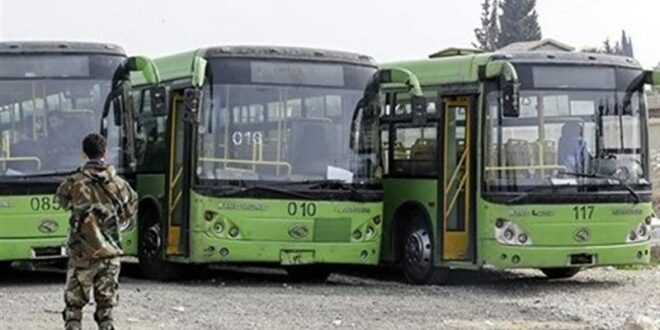 A batch of Faylaq al-Rahman militants began withdrawal from the militant-held city of Douma, located about 10 kilometers northeast of the center of Damascus, on Sunday, according to a report carried by SANA news agency.

The evacuation came a day after the militants left the towns of Arbin, Ein Tarma, Jobar and Zamalka as a result of the agreements reached with the Russian peace and reconciliation center in Syria.

There are also reports that the dominant militant group in Douma, so-called Jaish al-Islam, has struck a deal to evacuate the area.

The agreement allows wounded Takfiris and their families to leave for militant-controlled regions in Syria’s northwestern province of Idlib.

Meanwhile, the Russian peace and reconciliation center in Syria announced on Sunday that militants from Faylaq al-Rahman terror group have completely withdrawn from Eastern Ghouta.

Earlier in the day, the center reported that a total of 153,140 people, including over 40,000 militants and their family members, had been evacuated from various areas of Eastern Ghouta in the course of an eight-day operation.

“A total of 41,126 militants and their family members have been escorted from the residential areas of Arbin, Jobar, Ein Tarma and Zamalka,” the center’s commander Major General Yuri Yevtushenko stated.

He noted that all of the evacuees have been deployed in the residential area of Qalaat al-Madiq, in the de-escalation zone of Idlib.

Also on Sunday, Syrian troops and allied fighters from popular defense groups were deployed to Arbin, located 9 kilometers east of Damascus, after the last group of militants left the town toward militant-held areas in northern Syria.

Arbin along with Ein Tarma, Jobar and Zamalka were considered to be the most dangerous to Damascus due to their proximity to the eastern neighborhoods of the Syrian capital.

Foreign-backed Takfiri militants in those areas repeatedly attempted to infiltrate the capital and launched countless mortar shells on residential neighborhoods of Damascus.

Eastern Ghouta, a besieged area on the outskirts of Damascus which is home to some 400,000 people, has witnessed deadly violence over the past few months, with foreign-sponsored terrorists launching mortar attacks on the Syrian capital in the face of an imminent humiliating defeat.

The Syrian army has already taken control of over 90 percent of the militant-controlled territory.