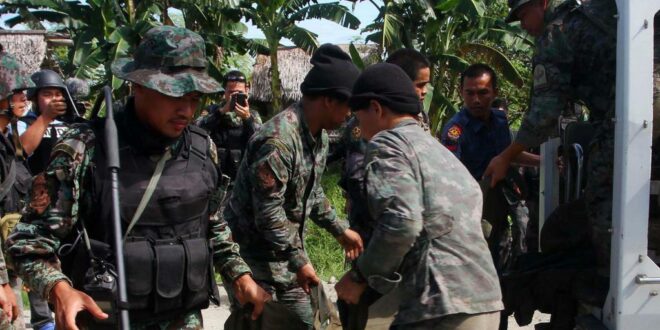 Days after eruption of the deadly clashes between the militants affiliated with ISIS terrorist group and the Philippines’ security forces in the city of Marawi in the country’s southern island of Mindanao, the media are talking about the black flag of the ISIS flying over some buildings in the Philippines.

Dozens of people were killed in the clashes between the Philippines security and the militants in the predominantly Muslim town of Marawi, which has a population of about 200,000.

The southern Philippines’ fighting flared up after the country’s security forces launched a military assault against Isnilon Hapilon.

The alarms bells appear to have been set off for the Philippines leaders who have already grown concerns about the rise and power gain of ISIS in the country’s southern areas. The army’s battle against Maute group just close to Marawi is ongoing now in a bid to repel ISIS plans to establish its first caliphate in Southeast Asia.

The analysts argue that it is not only the Philippines that is exposed to the risks of ISIS-caused security crisis, rather other nations in the same region face the same challenge posed by the militant groups that one after another pledge allegiance to ISIS that’s bastions are in Syria and Iraq. A large number of foreign fighters majorly from Indonesia and Malaysia are joining the Maute fight against the Philippines forces.

Alarm bells set off for the region

The ISIS-linked fighters have been active on the border areas between the Philippines, Malaysia, and Indonesia for the past two years. But the fresh armed clashes against the government forces in south of the Philippines marks the first time they have transferred clashes into urbane districts.

The last terror attacks, including the 2016 blast that hit a night club in the Malaysian capital of Kuala Lumpur, the suicide stack that hit Indonesian capital last week, and the latest offensive against south of the Philippines perfectly indicate that the terrorist group is flexing its muscles in Southeast Asia.

The International Center for Political Violence and Terrorism Research (ICPVTR), based in Singapore, has recently published a study about the extremist groups, saying that at least 60 various militias in Southeast Asia have pledged their allegiance to the ISIS and its leader Abu Bakr al-Baghdadi.

The ISIS moves in Southeast Asia are alarming as the region is room to an array of ethnic and religious groups. The regional leaders are concerned that increase in ISIS activities can usher in a period of violent fighting between the Muslim and non-Muslim groups across the region.

What is significant about ISIS rise in Southeast Asia is too far from ISIS strongholds in Syria and Iraq where the ISIS terrorist group is severely engaged on fighting the national armies.

Almost all of western and Persian Gulf Arab countries have attributed growth of ISIS in Syria and Iraq to the domestic developments of the two states in a bid to justify their interventionist policies in the West Asian region.

Now ISIS appearance in Southeast Asia makes it clear that establishment of ISIS goes beyond factors linked to what is going on in Syria and Iraq. Intensification of ISIS activities in the region in the past two years has been simultaneous with growth in Saudi Arabia’s financial support for the so-called Islamic centers there. During his late February visit to Malaysia, the Saudi King Salman bin Abdulaziz donated $250,000 to the country’s religious institutions. In fact, Riyadh’s support for the Malaysian religious institutions accounts for a major part of the bilateral Saudi Arabia-Malaysia relations. The Saudi Arabian financial aid to the Islamic foundations in Malaysia started since 1983 with a focus on supporting Perkim, the Malaysian Islamic Welfare Organization, and providing financial sources to set up International Islamic University Malaysia (IIUM).

In Indonesia too, Saudi Arabia has been a major donator to the Islamic institutions. The Arab kingdom so far built more than 150 mosques, a free university in the capital Jakarta, and multiple Arabic learning schools across the country. Riyadh sends Muslim missionaries to Indonesia and grants scholarships to the Indonesian students to attend the Saudi Arabian universities for higher education.

LIPIA, a college serving as a branch of Imam Muhammad ibn Saud University in Riyadh, is a hub of Salafism in Indonesia. The collage is located in Jakarta and financed by Saudi Arabia. The ostensible goal of its establishment was teaching the Arabic language in Indonesia. Bahasa, the official language of Indonesia, is not observable inside the building of the LIPIA. All of 3,500 students of the college attend there for free. The college recognizes music as a bidaa, Arabic for grim innovation, and the visitors and students are banned from laughing loud. The women and men are separated. The male students join debates in a room, and the female students follow the event in a separate place live via video conferencing. Funding such colleges and granting scholarships are said to have played a considerable role in Saudi Arabian help to spread of radical Salafism in the two the countries.

With Saudi Arabian financial aids pouring in to the Islamic institutions in the Southeast Asian countries like Malaysia and Indonesia, ISIS, a terrorist group with Salafi ideology, saw a high growth of its regional activities. With this in mind, it is baseless to draw a link between rise of ISIS in Southeast Asia and the internal developments of Syria and Iraq.

The more Saudi Arabia expands its religious and cultural influence in the countries of Southeast Asia, the more the region will see expansion of areas of activity of the terrorist groups. Under strong radical groups, the regional nations, who have so far lived in security and peace, will experience periods of violence and insecurity.

The regional nations need to beware of the upcoming danger of terrorism; otherwise they have to live the perils of terror attacks and shedding of blood of their beloved ones.

Share
Previous Imam Khomeini the architect of an enlightened nation
Next Ramadan in England; Bedford ​iftar brings community together