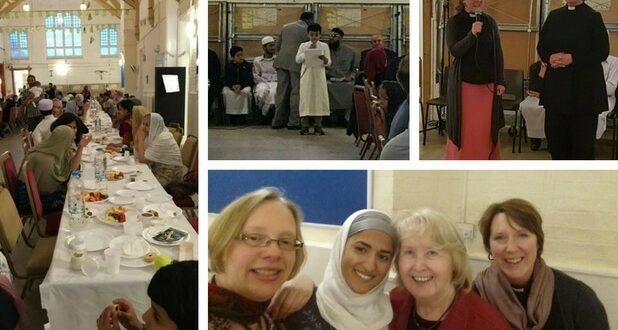 The community iftar at the Westbourne Islamic Centre attracted over 150 attendees from Bedford.
Religious traditions and rites bring the fold closer but can leave outsiders feeling excluded.

This year in Bedford, mosques collaborated with residents’ group Queens Park Community Orchard and used Ramadan to bring the wider community together.

Bedfordians of all faiths were invited to join Muslims in giving up food and water for one day, donating the money saved on food to charity, and broke the fast together at an iftar event last Sunday. More than 150 Bedfordians attended the event at Westbourne Islamic Centre.

Fsella Afzal-Pagliari, Queens Park Community Orchard member, said: “That moment when you take the first sip of water and bite into a date you feel so grateful – and it was good to share that feeling with others.

“There has been a lot of Islamaphobia and negativity about Islam recently in the media recently so it was good to do something to bring people together.

“Ramadan is not just about abstaining from food, it is about self control, spiritual cleansing and thinking about those who do not have enough to eat. It makes you so grateful.

“We give 2.5 per cent of our wealth to charity – it is one of the five pillars of Islam – and during Rama-dan we also donate the money we save on food.But people tend to be more generous, as they were at the iftar.

“We raised £250 for Bedford Friends of Refugees.”

Reverend Sonya Wratten, the priest in charge at All Saints Church in Bedford, decided to help organise the celebration after seeing the positive effect on the community in Leicester where she previously worked.

She said: “In Bedford people normally break their fast at home. We held the first community iftar last year, but just 25 people went. So there has been a huge growth.

“It was a very welcoming atmosphere; I would say joyful. A young girl from my church came with her nan and she really enjoyed herself.

“At the end I had an informal conversation about holy scriptures with some of the other women who were there and that was really interesting.”

Nadeem Raja from Ford End Road mosque, added: “It was good to see people getting involved and coming together.

“It was really good for the community.”