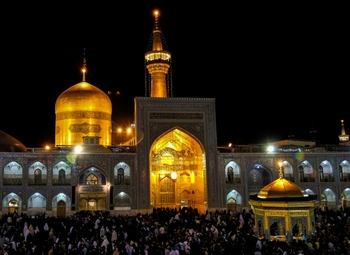 On the sideline of his visitation from the Razavi Shrine, a Mexican pilgrim said, “If life style and graces of the household of the Apostle of God (S.A.W.) and particularly Hazrat Reza (A.S.) are paid attention to by the world people, a new door will be opened to more conversions”.

On the sideline of his visitation from Razavi Shrine and in an interview with our reporter, Ivan Yunadi stated, “When I visited Mecca for the first time seven years ago, I asked God, in my first look at his home , to give me the opportunity of visiting Imam Reza’s (A.S.) Holy Shrine once a year”.

He added, “You may not believe but when I came back from Mecca, I suddenly came to Mashhad in less than one month. When I arrived here and had my first glimpse at its golden dome, I wanted Imam Reza (A.S.) to give me his pilgrimage every year and fortunately this desire came into reality”.

Referring to keen interest of Mexican Muslims and Shias in Imam Reza (A.S.), this Mexican teacher said, “We live in Mexico’s Silao and with respect to its one-million population, we are trying to make people familiar with Islam through different ways”.

Noting to the increasing number of Mexican Muslims and Shias in recent years, Younadi stated, “Cooperating with Hazrat Muhammad (S.A.W.) Center, some accurate programs have been provisioned to get millions of people in Silao, Puebla, and Sinaloa familiar with real Islam and Shiite”.

He asserted, “Offering books on Islam and graces of the household of the Apostle of God (A.S.) particularly Hazrat Reza (A.S.) are some of the most important programs arranged for these people”.