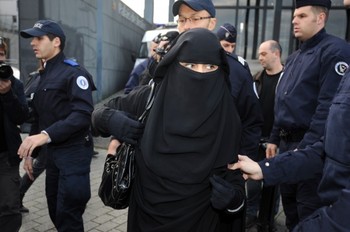 Chicago resident Itemid “Angel” Al-Matar filed a federal lawsuit today against six Chicago police officers and the City of Chicago, alleging that the officers used excessive force, made a false arrest, violated religious expression and undertook malicious prosecution against her.

The lawsuit was filed by both her attorney, Gregory Kulis, and the Chicago chapter of the Council of American-Islamic Relations (CAIR).

Kulis told ABC News on Thursday that his client was on her way home on July 4, 2015 when Chicago police stopped her as she walked up the stairs to a Chicago Transit Authority station. As she was walking, Al-Matar noticed a group of officers pointing at her, according to a civil complaint.

Al-Matar continued up the stairs and walked past the group of officers along with several other people, court documents say. She was then thrown to the ground at the stair landing, and her hijab was ripped off, documents say. The actions of the officers were “intentional, willful and with malice,” according to the complaint.

Other officers saw the “continued use of force,” but “failed” to intervene despite having the “opportunity” to do so, the complaint stated, calling the use of force “unprovoked” and “unreasonable.”

Al-Matar was charged with several crimes but was found not guilty of all of them, according to the documents. The complaint alleges that Al-Matar was falsely arrested to “cover up” the officers’ unlawful use of force, but did not state the crimes she was charged with.

The complaint also claims that Al-Matar was ordered to strip down naked at the police station to be searched and that her hijab and niqab were the “impetus” behind the police officers’ actions.

Kulis also said the officers accused her of being a “terrorist.”

Ahmed Rehab, executive director of the Chicago chapter of CAIR, called on Chicago Mayor Rahm Emanuel to speak out on the case.
Emanuel’s office did not immediately return ABC News’ request for comment. The Chicago Police Department said it is aware of the lawsuit but its policy does not allow them to comment on pending litigation or lawsuits.