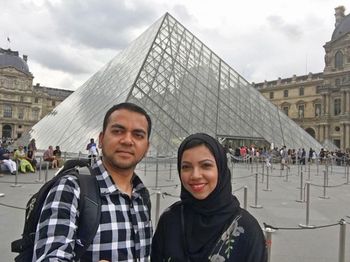 US Muslim couple kicked off Delta flight based on appearance

A Muslim American couple says they were kicked off Delta Airlines plane after an airline employee complained to the pilot she had not been comfortable with having them on board, based on their appearance.

The husband and wife, Faisal and Nazia, had boarded their flight from Paris, where they had celebrated their 10th wedding anniversary and were returning home to Cincinnati. The plane had been waiting to take off for about 45 minutes when a flight attendant became suspicious about the couple’s behavior.

A flight crew member reportedly said that Faisal had been “sweating” and had been heard saying the word “Allah.” Nazia was wearing a headscarf. The pilot was notified and he instructed the ground crew, saying he would not take off until the couple was removed from the aircraft.

“The ground agent said, ‘can you step out with me? We’d like to ask you a few questions.’ So I said, ‘Do you want us to get our things?’ And he said, ‘Yes, please grab all of your personal belongings. You’re not going to be on this flight,’” Nazia said Thursday at an Ohio office of the Council on American-Islamic Relations, Cincinnati.com reported.

The couple, who both are Pakistani-born US citizens, were forced to stay overnight in Paris and were put on a flight back to Cincinnati the following day.

A US customs official interrogated the pair when they arrived at the airport. Faisal asked what they had done wrong, to which the agent replied, “you have done nothing wrong, unfortunately this is the way the world is right now. It is Delta’s word against yours.”

The whole incident has left the couple angry regarding how the crew made “assumptions based on appearance.”

“It was humiliating. Why were we treated like criminals?” Nazia said. “We are American citizens. You can’t do this to us.”

The Council on American-Islamic Relations (CAIR-Cincinnati) alleges that the coupe have been the victims of discrimination and filed complaint against Delta.

“By falsely construing their simple and normal actions into something scary and threatening, it is clear that Mr and Mrs Ali were being singled out due to their Muslim appearance and name,” wrote staff lawyer Sana Hassan, as cited by the Independent.

The organization also wants the US Department of Transportation to look into the issue and come up with guidelines to try and avoid similar situations in the future.

Delta Airlines says it is looking into the incident and will carry out an investigation.

“Delta condemns discrimination toward our customers in regards to age, race, nationality, religion, sexual orientation or gender,” the statement read. “We are concerned by the allegations and are looking into what transpired.”

In a separate incident this week, two American Muslim women were asked to leave an American Airlines flight bound for Washington from Miami.

The pair, Niala Mohammad, a journalist for Voice of America and her friend, who did not want to be named, but works for the US government, were kicked-off the flight because an air steward said he had been uncomfortable about their presence on the aircraft.

Share
Previous Lady Fatima Masuma Birth Anniv. and Her Childhood
Next Quran competition for Muslim youth held in Michigan, US