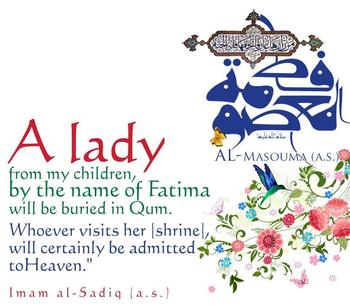 In the holy city of Medina, the holy household was awaiting the arrival of a new born.

In the house of Imam Kadhim (A.S.), Najma, the wife of the honorable Imam was eagerly looking forward to the arrival of the child; she was counting days and nights for that day. The Imam’s house was overwhelmed with happiness.

Finally, the day arrived, on the 1st of Dhil-Qa’dah 173 (A.H.) when Allah blessed the 7th Imam Musa Kadhim (A.S.) with a daughter. The child’s appearance was brilliant and cheerful and she opened her pure bright eyes to this world in the house of Imam.

All the members of the Holy Household were in utter happiness for the newborn and after the Imam, may be there was not anybody as happy as his wife Najma.

This was because this was the second child that was granted by the grace of Allah to Najma after 25 years. 25years ago, in the same month of Dhil-Qa’dah, Najma had given birth to a baby boy who after his father was to become the Imam and was to shoulder the responsibility of Imamate and guiding the Muslims.

Yes! That was 148 (A.H.), when the eight Imam, Ali (A.S.) was born and who was given the title of Ridha. Najma got immense pleasure in her first child and after years God blessed her and her husband Musa Kadhim (A.S.) with a daughter and a sister to Imam Ridha (A.S.).

Imam Musa Kadhim (A.S.) named his daughter Fatima, for the sake of love and special attachment he had with his grandmother Fatimah Zahraa (S.A.). Fatima’s purity, modesty, and piety were such that after sometime she was referred as “Masouma” (the infallible). This was because like her honorable Father, she used to keep away from all evils and sins.

Fatemah, was a name that was remembered among the Ahlul bayt who had hundreds of sad and sweet memories of the life of Bibi Fatima (sa).

If anybody chose the name Fatimah for their daughters, they used to give the same respect as the prophet (S.A.W.) used to give his daughter. She was never neglected. Imam Musa Kadhim (A.S.) also followed this tradition and used to love the new girl very much and never failed to show and express his kindness to and love for her.

Fatima Masouma was growing under the shelter of her father and dear mother and was day by day learning new things from both of them.

If the father of Fatima was the Imam of the Muslims and was matchless in his piety and chastity, then her mother was also pious and faithful who had accomplished her essential studies of Islam in the school of the wife of Imam Jafar Sadiq (A.S.). In those days she was the most intelligent amongst all women and it was for reason that the mother of Imam Kadhim (Hamideh) asked him to propose and marry her.

Hazrat Fatimah Masouma took advantage of studying in the presence of her father, brother and pious mother. All her young life was full of Islamic education. Every Friday Muslims would come to Medina with their religious questions.

Fatimah Masouma noticed the sadness and took the papers from them and answered their questions. The Muslims became happy and left. On the outskirts of Medina they met Imam Kadhim (A.S.) and they informed him of all that had transpired in his house. The Imam asked to read his daughter’s answers and after reading expressed his happiness, praised her and in a short sentence said, “May her father be sacrificed for her.”

A Glance At The Holy Shrine of Hadrat Fatima Masouma (SA)

When Hadrat Fatima Masouma (AS) was buried in Qum there was a shade made of straw on the holy grave built by Musa bin Khajraj.

The first dome which was in the form of a tower, was built by Hadrat Zainab (AS), the daughter of Imam Muhammad Taqi al-Jawad (AS) in the middle of third century hijrah. Stone, bricks and stucco were used as construction material for this dome.

With the burial of the ladies from the Holy Ahlul Bayt (AS) beside the grave of Hadrat Fatima Masouma (AS) during later period two other domes were constructed beside the already existing dome.

These three domes were existing till the year 447 A.H./1055 A.D., when during that year Mir Abul Fazl Iraqi, the minister of Tughril the Great, at the insistence of Shaykh Toosi (R.A.) constructed a big dome without a balcony or chamber, in the place of the three existing domes which totally covered all the graves of all the divine ladies buried in that place. This dome was decorated by colorful bricks and tiles.

In the year 925 A.H/1519 A.D.., this dome was decorated and renovated with glazed tiles by the orders of Shah Baigi Begum, the daughter of Shah Ismail Safavi. A towering balcony with two minarets was constructed in the Atiq courtyard.

In the year 605 A.H./1208 A.D., Ameer Muzaffar Ahmad bin Ismail, the doyen of the Aal Muzaffar family ordered the master craftsman Muhammad bin Abu Taher Qummi, to make variegated glazed tiles for the holy grave of Hadrat Masouma (AS). After eight years of incessant endeavour the master craftsman completed constructing the beautiful tiles for the grave of Hadrat Masouma (AS) and in the year 613 A.H./1216 A.D., it were fixed on the holy grave. In the year 1998, the holy grave have once again been decorated with glazed tiles and beautiful stones and the internal walls of the burial chamber were ornamented with beautiful green marble stones.