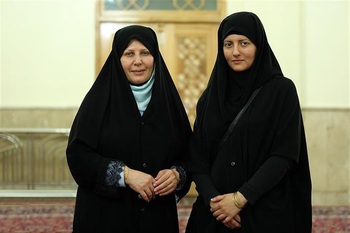 Imam Reza’s Light Connects me to the God – Sweden resident

Every year many people seeking for Islam and the reality of Muhammad’s (S) religion set for Mashhad so that by uttering Islamic profession of faith, cleanse their soul and body from the rust of impiety and make pledge with the kind Imam, restarting a new life.

Here is an interview made with a mother and her daughter from Ahwaz who have spent more than 20 years in Sweden; apart from safeguarding their religion, they managed to guide the seekers of reality to the right path.

– I am Shima Moradi I was born thirty years ago in Ahwaz. I resided along with my family in Stockholm, Sweden capital, when I was two years old.

Why did you migrate to Sweden from Iran?

The atmosphere of Sweden should have affected you. How were you able to keep your Iranian identity and religion through all these years?

– No, it was not as you think. I had gone to Sweden as a child and did not remember anything of my people or my country. Hence, I was affected by the culture of Sweden, adopting it as my culture. I did not have veil like Iranian and Muslim girls.

How about your parents and your brother?

– Unfortunately, some Iranians who go abroad got easily affected by that country. We changed and saw ourselves completely free, too. Thanks God, God helped and guided us to the right path. My mother found the right path a few years earlier than me and this was the reason why I became religious. Then I faced a paradox of Swedish and Iranian cultures.

Was it difficult to choose one culture over the other?

– Iran was my hometown and Sweden was where I grew up. In fact, the Swedish culture dominated the Iranian culture. It was difficult for me to accept it, as I did not have any presuppositions about Iranian people and their religious rituals. It was grace of God that awakened my family and me so as to find our Iranian identity.

Don’t you decided to come back to Iran forever?

– I have not decided about it definitely. But I see our migration to Sweden as a divine destiny. Many people in that country need to be guided and I thank God for granting me the grace of making His servants familiar with Him through consultation works.

You mentioned to your mother’s earlier guidance. How did you find your way?

– Light of the household of the Apostle of God (S.A.W.) connected me to the religion. We did not hear anything of the household of the Apostle of God (S.A.W.). I did not know why the religion matters and even the name of God was not comprehensible to me. But as I am fond of inquiry about what I do not know, I came to learn about Sunni and Shi’ite. I was anxious to know the difference between these two sects of Islam. My mother searched for Shi’ite mosques. There I got eager to know why he chose Shi’ite. After extensive investigation, I came across the name of Imam Ali (A.S.). However I read about him, more and more I became a devotee of him as if I knew him for long years. Then I started recognizing other religious leaders and this led me to discovering the reality of God and His adoration.

How many years are you familiar with God and the household of the Apostle of God (S.A.W.)?

– It is five years

What made you to help those who are seeking for the reality?

– I do consultation and people refer to me for their problems. My job caused that I managed to make a number of people familiar with God.

Was your academic major psychology?

– No, it was global marketing and does not have to do any with my job.

How many years are you involved in consultation? Do you study western psychology for your work?

– It is four years that I am engaged in psychology work. I study religious books. For those who refer to me for their family problems, I recommend uttering Salawat (formula of praise) for gaining tranquility. I taught them other religious chants as well and recited the verses of holy Qur’an and the traditions of the household of the Apostle of God (S.A.W.). I offered consultation both personally and by call and those who were satisfied with my service propagated it also to others.

During four years of your serious activity, how many people have become Muslim?

– Seven individuals, one last year and six this year including an aged couple who after uttering Islamic profession of faith, the marriage sermon again was offered to them and the bride said yes, her marriage portion was one volume of holy Qur’an, one jasmine, and 14 roses.

Why on the earth did you take them to Iran and the Holy Shrine of Imam Reza (A.S.)?

– Because Iran is safe and on the other hand, the light of Imam Reza (A.S.) and the household of the Apostle of God (S.A.W.)linked me to God.

And your last words?

– I am happy and perform the prostration of thankfulness. Only this.