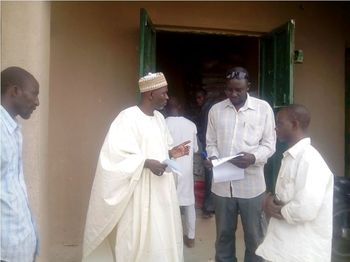 Islamic Movement in Nigeria issued a statement of recent attack of thugs in Ramadan Food Distribution in Zaria: Food items were distributed to the needy in and around Gyellesu residence in particular and Zaria in general at the start of the Holy month of Ramadan on behalf of the leader of the Islamic movement in Nigeria, Sheikh Ibraheem Zakzaky, as has been his practice for several years. Being detained this year, it was his wish that the humanitarian assistance provided by him must be continued irrespective of whether or not the government releases him. To fulfil this wish, on Monday 6th June, assorted food items were distributed as was the practice, with families happily collecting with so much gratitude.

The following day however, certain thugs sponsored by Kaduna state government appeared in the Gyellesu neighbourhood, wielding machetes and sticks and pelting stones at both those who carried out the distribution as well as the beneficiaries. They forcefully confiscated the food items and littered the streets with them in a manner that only vandals would do.

As if it was not bad enough, the thugs proceeded to attack the residence of the Sheikh’s younger sister, Hajiya Maimuna Yakubu, who resides in the same Gyellesu neighborhood and illegally invaded her residence and threatened to brutalize her. This criminal trespass and assault was followed by further confiscation of all her foodstuff and littering of the streets with them as well. In the process, several people in the house were injured.

Meanwhile, the authorities who clearly sponsored these thugs to disturb public peace, harass innocent residents, seize their foodstuff and litter the streets in the Holy month of Ramadan simply kept a blind eye and pretended nothing had happened. None of the thugs or the government sponsored clerics who openly planned and executed the attack was arrested to face the wrath of the law.

We wish to draw public attention to the fact that Kaduna state government is desperate to portray the IMN in bad light, especially with regards to our relationship with other people in general and the Gyellesu residents in particular. Their extreme anxiety that this gesture by the leadership of the IMN would further expose their lies pushed them to this latest show of shame. That they stooped this low to assault indigent residents of Gyellesu simply because they graciously collected food items from the leader of Islamic Movement as they have done every month of Ramadan in the past, when the government is not bothered about them, is yet another public low for the government.

Finally, we challenge the Kaduna State government to refute its involvement in this indignity by arresting and punishing those involved in the assault, disturbance of public peace, trespass and willful destruction of people’s foodstuff, and to pay these poor citizens damages as well.