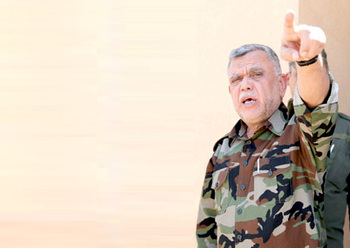 A commander of the volunteer forces fighting alongside the Iraqi military against the Daesh Takfiri terrorist group in Iraq says the ideology adopted by the Takfiri terrorists originates in Saudi Arabia.

Hadi al-Ameri, who is also head of the Badr Organization, an Iraqi political party, made the remark in an exclusive interview with Press TV on Sunday.

“Therefore, we totally disregard those pointing the finger at us,” Ameri said, rejecting criticism that the volunteer forces, also known as the Popular Mobilization Units, are spreading sectarianism in Iraq.

Iraq has been fighting a campaign of terror launched by the Daesh Takfiri terrorist group, which launched an offensive in the country in June 2014 and overtook certain areas of Iraq.

The Popular Mobilization Units have been an efficient force, allied with the Iraqi army, in attempts to take back the militant-held areas and degrade the terrorist group of Daesh.

The remarks by Ameri, whose forces fight under the banner of the Popular Mobilization units, came after the Saudi ambassador to Iraq, Thamer al-Sabhan, claimed that sectarianism and tribalism were the driving force behind the Iraqi government’s arming of volunteer forces.

Reacting to the developments, the popular units called on the central government in Baghdad to expel the Saudi ambassador for instigating sedition and insulting the Iraqi people.

Elsewhere in his remarks, Ameri stressed that it is crucial to fight Takfirism on an ideological level alongside the military operations, so as to completely defeat the terrorists.

Ameri also said the US supported terrorists and extremists in Syria, who then penetrated into Iraq and began killing the people. He warned that Daesh is like a dangerous disease that can spread all over the world if it is not eradicated.

The Iraqi commander praised the unity among all Iraqi groups fighting the terrorists, adding that they won’t stop until the city of Fallujah, in the western Anbar Province, and other places in the country are liberated from the Takfiri terrorists.

In recent weeks, the Iraqi army has been engaged in large-scale military operations to wrest back control of Fallujah. Iraqi forces have freed most areas around the city, but are facing resistance during their advances.

Humanitarian organizations say Daesh has trapped around 50,000 civilians, including 20,000 children, in Fallujah, threatening those who try to escape with death.