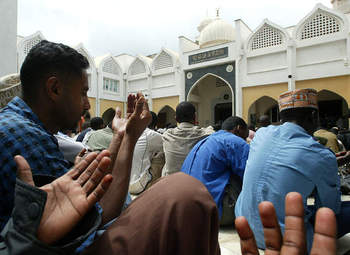 For centuries Islam and Christianity have inter-mingled as people mark festivals of both faiths.

The sun had already sunk below the blood red horizon in Addis Ababa’s neighborhood of Semien Mazegaja as Jemal Ahmed and his wife Kebedech Aliyu prepared for the Muslim holy month of Ramadan.

Sitting in their neat one-bedroom home with their year-old twins Ismael and Issac sleeping nearby, Jemal, a Muslim, and his Orthodox Christian wife Kebedechexplained how their different faiths did not prevent them from honoring each other’s religions.

“Thanks God, we lead a happy and cheerful marriage,” Jemal, 31, said. “We are faithful to our beliefs and a marriage that made us one.”

Speaking in a soft voice, Jemal explained how he and Kebedech, 29, would fast and pray together during Ramadan. “I also accompany her in every religious event and Lent,” he added.

Their cross-religious marriage is reflected in their children’s names,” Jemal said. “Ismael and Issac are Christian and Muslim names so the kids will appeal to both religions and be what they would be.

“They are already Muslims, according to the teachings of Islam and our agreement.” Turning to his wife, he asked: “Is it not?”

“Hum,” she coughed and burst into merry laughter.

“This is a tradition in Ethiopia,” she said. “They have a religion that has accepted me wholeheartedly.”

In Ethiopia, which is home to one of the world’s oldest Christian communities, Sunni Muslims make up around 34 percent of the estimated population of 97 million.

According to Islamic scholar Ahmed Abdurrahman, Ramadan in Ethiopia has always been marked by interaction between Muslims and Christians.

“Here there is no segregation,” he said. “No Christian- or Muslim-onlyneighborhoods. We have lived as one single indispensably linked community ever since Islam arrived in Ethiopia.

“Since then our Christian fellowmen join us during iftar [the evening fast-breaking meal] and all-night prayers. We are also together with them in their Lent season and have a good time with them during holidays.”