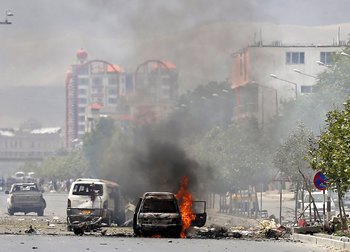 American airstrikes in the southeastern Afghan province of Paktika killed at least 17 civilians, local officials and elders said on Thursday, differing from official American and Afghan claims that only militants had been killed.

Hajji Muhammad Hasan, a former senator from the Gomal District, said that three drone strikes hit the area of Nematabad on Wednesday. He said that the first strike hit a pickup truck carrying Hajji Rozuddin, a local elder on his way to mediate a land dispute in the Kakarzai tribe. Also in the truck were four of Mr. Rozuddin’s bodyguards and seven other people.

A second strike soon after killed two people who had come to pick up the bodies, Mr. Hasan said. A third strike killed three others who had climbed a small hill to try to see what had happened and why the previous two men had not returned already. (There is rarely any phone signal in Gomal, in rugged terrain along the Pakistani border.)

“Hajji Rozuddin was strongly anti-Taliban — he carried bodyguards because the Taliban were trying to kill him,” Mr. Hasan said. “The car was completely destroyed, and there was little of the bodies left.”

Shaista Khan Akhtarzada, the district governor of Gomal, said an investigation team had determined that “the people killed were civilians.”

But the chief of police in Paktika Province, Gen. Zorawar Zahid, insisted that only Taliban had been killed in the strikes. In a differing account, the Afghan Defense Ministry said in a statement that operatives for Al Qaeda had been killed in Gomal.

A spokesman for the United States military in Afghanistan, Brig. Gen. Charles H. Cleveland, said: “We can confirm that the U.S. conducted two counterterrorism strikes in Paktika on Wednesday afternoon. There was no evidence to indicate that there were any civilian casualties at all.”