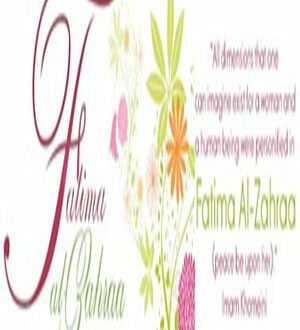 Martyred : 13th Jamadi-ul-Awwal or 3rd Jamadi-ul-Akhir 11Hijrah at Medina at the age of18 years (due to injury inflicted upon her through force of a falling door by a hypocrite).

Buried :The cemetery of Jannatul Baqi or in the Masjid-un-Nabi at Medina

The Birthday of Hadrat Fatima Zahra(A.S.)

Hadrat Khadija’s(S.A.) excellent and noble characteristics are fantastic example for mankind to follow. She is the lady who gave birth to Fatima Zahra(S.A.) and brought her up with talents and virtues. Fatima Zahra(S.A.) was a descendant of two great people. Furthermore, there are undisputed facts that have been declared by the Sacred Messenger and Ahlul-Bayt (A.S.) that neither science nor contemporary discoveries have been able to conquer the deep meanings of, despite what science has achieved in these fields. Because these facts are beyond the reach of machines and telescopes, photographer’s advanced lenses can not capture their rays, nor can natural or logical senses realize them. Actually, the truth goes beyond material and logical realization, for the five senses are unable to define it.

We move on to elaborate on the subject by verifying it through a selection of narration’s mentioned in Volume 6 of Bihar Al-Anwar.

Gabriel descended to the Messenger of Allah (S.A.W.) and told him:

O Muhammad! The Most Exalted sends His peace upon you and commands you to refrain from (coming close to) Khadija for forty days. It was difficult for the Prophet, who loved and adored Khadija to do so; nevertheless (in obedience to Allah’s command) he spent forty days fasting and praying nights. When it was close to the end of the forty days, he (S.A.W.) summoned Ammar Ibn Yasser and asked him to go to Khadija and tell her:

“O Khadija! do not assume that my separation from you means abandoning or forsaking you, rather my Lord commanded me to do so, so expect nothing save benevolence, for surely Allah (exalted is His Name) praises you to His most honorable angels several times a day. Therefore, with nightfall, close the door and lay dawn to sleep; for I will be staying at Fatima Bint Assad’s house.”

This brought sad tidings to Khadija who missed having the Prophet by her side. At the end of the forty days, Gabriel once again descended to Allah’s Messenger and said:

“O Muhammad! The Most Exalted sends His peace upon you and commands you to be prepared for His salutation and gift.”

“Gabriel! What is the Lord of the world’s gift and what is His salutation?”

“I have no knowledge of it” At that moment, Michael descended with a plate covered with a kerchief made of brocade or sarcenet and presented it to the Prophet! Gabriel said to him (S.A.W.):

“O Muhammad, your Lord commands you to break your fasting with this food tonight.”

Imam Ali Ibn Abu Talib (A.S.) said in this regard:

“The Prophet (S.A.W.) used to order me to open the door to whoever wanted to join him when he came to break his fast, bus that night he ordered me to guard the door of the house and said to me:

‘O son of Abu Talib! This food is forbidden to everyone save me.”

“I sat at the door, and the Prophet (S.A.W.) uncovered the plate, in privacy, to find a cluster of dates and a bunch of grapes; he ate until satisfied and drank his need of water. He then extended his hands to be washed, so Gabriel poured the water, Michael washed his hands, and Israfil dried them. Thereafter, the remaining food with the plate ascended to heaven.

Then he (S.A.W.) started to prepare himself for prayers when Gabriel said to him:

“Prayer is forbidden to you until you go to Khadija’s house and perform coition with her; for Allah (Glory be to Him) ordained upon Himself to create noble progeny from you tonight.’ So he (S.A.W.) rushed to Khadija’s house.”

It can be concluded from the above mentioned narration that: 1. Allah Almighty commanded His Messenger to abandon Khadija a period of time so that his longing and wanting her increased.

2. He (S.A.W.) performed more worship so as to achieve a higher level of spirituality and sacredness, as a result of being in constant contact with the heavenly world.

In addition, there are various traditions with minor verbal differences and the same fundamental meaning that Fatima Zahra (S.A.) was created in very sacred way. We mention herein some of these narrations and restrict ourselves to the part which are related to our subject in observance of briefness and omit the rest:

Imam Reza (A.S.) said: “The Prophet said (S.A.W.): ‘On the night of my ascension to Heaven, Gabriel took my hand and led me into Paradise, then he handed me dates from which l ate. When I descended to Earth, I came unto Khadija who became pregnant with Fatima; thus, Fatima is a human huri, whom whenever I long for Paradise I smell.’

Imam Baqir (A.S.), on the account of Jabir Ibn Abdullah, said: “It was said to the Messenger of Allah: Surely you kiss, embrace and bring Fatima close to you… and treat her better than your other daughters!” He (S.A.W.) commented: “Indeed, for Gabriel brought me an apple from heaven, which I ate which later bore Fatima through Khadija.Hence, I smell paradise’s fragrance in her.”

Ibn Abbas said: “Aisha entered the house while the Messenger of Allah was kissing Fatima, so she said:

‘Do you love her, O Messenger of Allah?’

‘Indeed, by Allah if you knew the extent of my love for her, your love would increase for her. When I was in the forth heaven… (until he said) that I found these dates softer than butter, more pleasant than musk and sweeter than honey. So when I descended to earth, I came unto Khadija and she bore Fatima. Thus, Fatima is a human huri, whenever I long for paradise I smell her.’