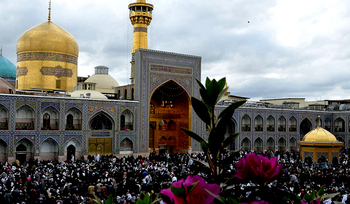 Seyyed Ahmad Hashemabadi at a press conference which was held to explain Astan Quds Razavi Nowruz programs continued “from March, 16 to April, 1, 5 to 11 thousand servants would urgently serve the pilgrims of Ali ibn Musa al-Reza (A.S.).”

“These offices which are established to expedite the service to pilgrims with temporary structures are ready to serve Nowruz pilgrims with a capacity of over 5 thousand safety consignment boxes.”

He said, pointing out the security measures taken in the Consignment Offices of Razavi Holy Shrine.

“Due to the anticipation of massive presence of the pilgrims in New Year’s ceremony, inspection gates of Razavi Shrine will be moved to the edges of the streets leading to the Shrine, and all the holy premises will be ready to serve for deployment of the pilgrims” Hashemabadi asserted.
Flower-decoration during Nowruz.

“In accordance with past years, during celebration days of the New Year, all levels of holy premises will be embellished and flower-decorated with 100 thousand bouquets” he continued, stating that with distinctive arrangements and flower-decoration, the Illuminated Shrine of Kind Imam of Shiites would grasp a spring mood during Nowruz.

Hashemabadi, uttered that the washing of Razavi Holy Premises by 30 mechanized machines, dust clearing of all walls, tile works and mirror works of courtyards and porticos, and perfuming by the highest quality essences as other daily services of Astan Quds Razavi Deputy of Sacred Premises.

“Owing to the volatile weather conditions in early spring, and chance of precipitation during these days, the necessary measures to deal with any weather conditions have been taken into account, and according to daily weather condition, the carpeting program of Razavi Shrine will be carried out” the Supervisor of General Office of Public Relations of Astan Quds Razavi added, enunciating the preparation of 6 thousand new carpets during Nowruz.

“During these days, all Razavi Holy Shrine Premises, including courtyards, corridors, etc., will be carpeted and at the disposal of pilgrims. Meanwhile, traffic routes will be characterized by carpets with different colors, in order to make sure that there is no hindrance in serving the pilgrims” he reiterated.