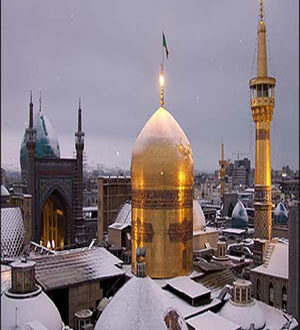 Tributes to the Eighth Divinely-Decreed Imam

“And amongst them We appointed Imams to guide [the people] by Our command, when they had been patient and had in Our signs.” (Holy Qur’an 32:24)
On 28th of Safar, we commemorated the anniversary of the departure from the mortal world of the Almighty’s Last and Greatest Messenger, Prophet Muhammad (SAWA).
We also mourned the martyrdom of his elder grandson and 2nd Infallible Heir, Imam Hasan al-Mujtaba (AS), who was made to leave the world in 50 AH on the 39th anniversary of the passing away of his grandfather.
On the last day of Safar, which also marks in Iran the end of the two-month mourning period for history’s most heartrending tragedy that saw the martyrdom of the Prophet’s younger grandson, Imam Husain (AS) in Karbala in 61 AH, we would be paying tribute of tears to yet another martyred Imam of the Ahl al-Bayt.

In the above mentioned ayah, God speaks of appointing Imams (divinely-decreed leaders) for the guidance of mankind and says they were patient and steadfast – even in the most adverse circumstances.
The question that arises here is: who dared to kill these appointees of God and for what reason?
The history of Islam provides us the answers, especially the sad turn of events the moment the Prophet breathed his last.
As God’s Final Emissary, the Messenger of Mercy did not leave Muslims in the dark. On divine commandment, on the 18th of Zilhijja, 10 AH, while returning from his Farewell Hajj Pilgrimage he proclaimed his Immaculate Cousin and Son-in-Law, Imam Ali ibn Abi Taleb (AS) as vicegerent at the memorable gathering of Ghadeer-Khum in front of at least a hundred thousand people.
Although his companions surged forward to congratulate the Appointee of God and the Prophet, there was malice in some hearts in which faith (Iman) had not entered despite their lip service to Islam.
Thus, no sooner did God summoned Prophet Muhammad (SAWA) to His presence, the turncoats amongst his companions gathered at Saqifa Bani Sa’da to physically assault each other while choosing one of them as caliph or the political ruler of the expanding Islamic state, in order to deprive Imam Ali of his right of temporal leadership as well.
Of course, the God-given spiritual authority of the Legatees and Legal Heirs of the Prophet was beyond the powers of these self-styled caliphs.
One of these usurpers named Mu’awiyyah ibn Abu Sufyan – a hardcore heathen as late 8 AH, that is two years before the Prophet’s passing away – had Imam Hasan al-Mujtaba (AS) martyred through poisoning.
A decade later, Imam Husain (AS) was cruelly martyred along with his sons, brothers, nephews, cousins, and loyal companions by the Godless Yazid ibn Mu’awiyya.
The caliphs, who used to terrorize the people of Arabia and the neighbouring lands in quest of wealth and territory, greatly feared the popularity of the Imams of the Ahl al-Bayt among the Muslims, and for this reason spared no efforts to imprison them and martyr them.
One such usurper was Mamoun, the crafty caliph of the Abbasid dynasty. He had the Prophet’s 8th Infallible Heir, Imam Reza (AS), mischievously declared as his heir-apparent in order to deceive the people, in the hope that worldly power might tarnish the image of Imamate.
When this plot failed, he had Imam Reza (AS) martyred through poisoning and then feigned that the Prophet’s Rightful Heir had died a natural death by joining the funeral procession as a mourner.
Today there is no sign of the Omayyad and Abbasid caliphs, and not even their graves, let alone their palaces. Their only legacies are the Salafi/Takfiri terrorists indulging in the worst crimes against humanity.
As for the Imams of the Ahl al-Bayt – the Appointees of God – they reign supreme till this day, with millions of people from all over the world converging on their holy shrines to worship the One and Only Creator and to pray for the reappearance of the Prophet’s 12th and Last Successor, Imam Mahdi (AS), who will cleanse the planet of all vestiges of corruption and oppression by establishing the global government of peace, prosperity and justice.