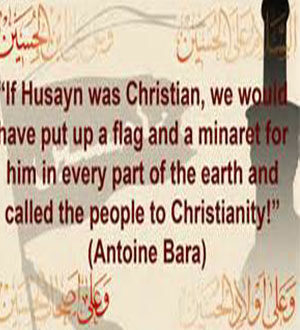 Who were the killers of Imam Husayn(a.s)?

Source: Understanding Karbala, By: Allamah Sayyid Saeed Akhtar Rizvi
Time and again objection is issued by the ignorant that killers of Imam Husayn (a.s) were Shias. Though more than once those objections have been replied and refuted, yet once in a while the same voice is heard again. I would like to present a criterion by which truth and falsehood can be distinguished and any impartial, justice-minded person would have no difficulty in differentiating between truth and falsehood.
If we ponder upon the following three points there would be no problem in taking a decision:

Pages: 1 2 3 4
Share
Previous Women of Karbala and the perpetual Message of Imam Hussain !!!!
Next Abu Bakr al-Baghdadi, Bin Laden legends ‘Made in USA’