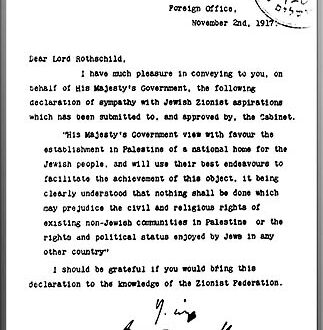 THIS DAY IN HISTORY

The Balfour declaration
Elapsed Time: 97 years.
The Balfour Declaration:
Foreign Office
November 2nd, 1917
Dear Lord Rothschild,
I have much pleasure in conveying to you, on behalf of His Majesty’s Government, the following declaration of sympathy with Jewish Zionist aspirations which has been submitted to, and approved by, the Cabinet.