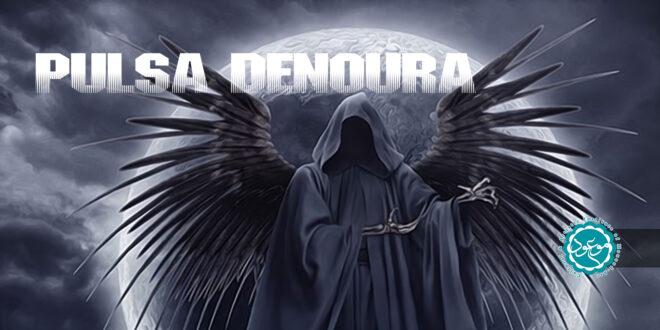 Pulsa Denoura or the Curse of the Jewish DeathTop of Form

Jewish Studies: One of the things that has always been condemned in the divine religions; It’s a matter of magic. The number of these verses in the holy books is so much that it is beyond the scope of this opportunity. The misuse of this dhikr was one of the perversions of a group of Jews that led to their rejection; As the religious-Zionist communities are reluctant to mediate these actions, so the author has faced a severe shortage of English, Arabic and Hebrew sources in compiling this article.

This issue [that is, turning to magic] has faced ups and downs at various points in Jewish history. But with the establishment of the fake Israeli regime, a new chapter of magic and the use of evil powers began, in which we see the use of the spels based on the words of the Talmud and Zohar (the most important book of Kabbalah), but in its new form; the Curse of Death (Pulsa Denoura) is one of them.

The Curse of Death (פולסא דנורא) [Pulsa deNura, Pulsa diNura or Pulsa Denoura] in Aramaic means “mass of fire/whip of fire”, and the author’s studies indicate that it has only been used as a spel in the contemporary period.

Ehud Sprinzak, a professor of political science at the Hebrew University of Jerusalem, states that the spel of the Curse of Death has been passed from chest to chest up to now.[1]

The spel first appeared in the media after the assassination of Isaac Rabin, and a group of rabbis announced that they had performed the spel in front of Rabin’s residence and demanded his death.

Translation: And as for Isaac – the son of Rosa – with the title of Robin, we are allowed to summon the angels of Kabbalah… to kill him because he has misled the holy nation and ceded the land of Israel to its enemies…

There also appears to be a picture of Rabbi Avigdor Eskin, a rabbi, and member of the Palace Religious Group, in front of the Ishaq Rabin Presidential Palace on Rahiva Street in Jerusalem.[4]

But it was only after the release of a video on the Zionist network on July 22, 2005, in the old cemetery of Rush Pina (ראש פינה) and near the tomb of Shlomo bin Yusuf,[5] that there was speculation about the existence of such a spel became certain.

Legend has it that to perform the ritual, ten Kabbalists must utter the curse of death to the wall of Nadba while all of them are wearing black robes and have already fasted for three days. In the middle of the night, under the light of black candles, the Death Angel is requested to do its mission.

It is done by first asking the guardian angel of the person to take his protection away from him and then sending the angel of death to him.

The legends depict the end of the ceremony that the group leader has to put his foot in the blood of the mentioned person, all with the phrase “May it be destroyed” ask for his destruction.

The person cursed to death must have done something against his people. According to Professor Rafael Cohen Almagor, a professor at the University of Haifa, in his book Liberal Democracy “And the Limits of Tolerance”, if a person is innocent, he casts a spel on those close to him.

We should note that texts deal with such talismans, unanimously believe that the curse of death will affect within a month.[6]

In addition, the phrase “curse of death” is not used in the Torah and is found only in the Talmud and in four places;[7] Two are used about the rebuke of angels by God, and only two are for man, one in the curse of a dead person and the other between two rabbis during an argument.

We did not find anything in the reviews of the book Mysteries (Sefer Harazim), the most famous book of Jewish magic.

The only place where the phrase “curse of death” is mentioned and the manner of the ceremony described in detail is in the book Pulsa Denoura (Curse of Death / דנורא דנורא) written by Rabbi Yosef Dayan.

Rabbi Youssef Dayan appeared in a video aired on Channel Two of Israel about the execution of the curse of death against the then Prime Minister, Ariel Sharon.

He also appeared in the network’s studio and defended his actions and accomplices. But later, with the media coverage of the issue and the growing criticism of Orthodox Jews, he relinquished his position, calling Pulsa Denoura a form of worship like any other.[8]

The Curse of Death is said to come from the Takfir ritual in Judaism. Many of their conditions and practices are the same.

Zion Zohar, who has conducted extensive studies in this field, believes that the curse of death is a new issue and does not exist in ancient and original texts, and the Orthodox Jews are trying to eliminate the forgotten ritual of Takfir חרם)). In the Jewish religious community, they created it as an effective weapon to gain power.

It is said that the Orthodox Jews of Natura Karta,[9] who identify themselves as anti-Israel, have been among the groups that use this tactic to advance their goals.[10]

According to Haaretz, the following can be mentioned among those who have been cursed to death:[11]

Haaretz continues, after the founding of Israel, the word Curse of Death has been replaced by Takfir. The most important point here – regardless of whether it is true or false – is to use this tactic against the Jews; The Daily Beast correspondent Nicholas Saidel is surprised to report that the victims of Pulsa Denoura were all Jew. But the genocide was common among the Jewish rulers. One of the earliest examples of this is fasting under the title of Fasting of Gedalia (צום גדליה), which commemorates the memory of the Jewish murderer Gedelia Ibn Ahiqam (גדליהו בן-) – the Jewish ruler of Babylon in the state of Judea 2500 years ago – by fasting.[16]

On this occasion, we mention the latest cases of the execution of the death curse as an example;

American billionaire Solomon Obstfeld died on July 9, 2010, after falling from the 19th floor of his private tower in Manhattan. The police investigation showed that he had committed suicide. His family and friends attribute the death of the 55-year-old billionaire to a quarrel with a rabbi. The rabbi threatens Solomon Obstfeld with the curse of death.

The police reports that no ladder or chair was found to be used by the orthodox billionaire commit suicide, as well as the religious nature of the person, reinforces speculation about not committing suicide.[17]

Interestingly, Solomon Obstfeld had a close relationship with Ehud Olmert and Ariel Sharon, another victim of Pulsa Denoura.[18]

Naftali Bennett,[19] the current Prime Minister of the Zionist regime, received a threatening letter on the death sentence after the enactment of conscription for Jews studying the Torah, who had previously been exempted from military service despite numerous protests.[20] [21]

The threat of Qais Nasser[22] is perhaps one of the few examples of Pulsa Denoura against an Arab. According to Al-Shams News Agency, in May 2014, Qais Nasser, a law professor at the Hebrew University of Jerusalem, and a Palestinian residential area legal activist in Israel’s Green Zone, was threatened with death by the settlers.[23]

Finally, there are a few things to keep in mind;

First, the curse of death is a modern phenomenon that orthodox groups use to settle scores with the opposition and gain power.

Translation: “Research shows that Haridi groups created Pulsa Denoura.” “Recent research suggests that the curse of death is not a Kabbalistic and sacred text, but the handiwork of the Haridi religious party and group.”

The effectiveness of these mysterious and magical activities is a matter of serious doubt. According to Prof. Brian M. Britt, Professor of Religions, there is a clear indication in Old Testament cases that spels may not work, such as the Voyage of Numbers[25] and Samuel[26].[27]

In other words, whether the curse of death is true or false is not the subject of this article. The use of magic by Orthodox Jews against other Jews has attracted the author’s attention. As this magical method is by no means the only case of Jewish activities against the Jews, but also other cases such as the religion of Rudoff (דין רודף) or Moser (מוסר) or Kheram (חרם), the study of which requires a separate space.

And last but not least, these spels have so far did not affect Islamic Iran, as Sputnik pointed out on June 22, 2016:

According to several meetings of Rabbi Ovadia Yosef with Israeli officials, an attack on Iran is impossible until the religious and Kabbalistic centers have mastered confronting Iran and the curse of the ayatollahs… Israel’s existence depends on the Ayatollahs’ Curse.[28]

All of this led Ovadia Yosef to desperately call the Israelis into a mass curse against Iran in 2013, but his life was not enough, and he died in 2013.

[4] The author did not find the original image during the search.

[5] The first Jew to attack a bus carrying Arabs

[17] For Orthodox Jews, suicide is a great sin