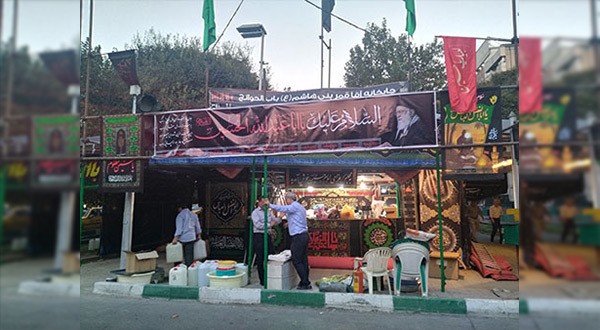 Tehran’s streets on Wednesday the 20th September were remarkably different than the other days of the year. Since the early noon hours, the city started getting ready to embrace the new Islamic Hijri year which starts with the commemoration of what some historians acknowledge as the tragedy of all human tragedies; the martyrdom of Imam Hussein [AS].

I was at the Keshavarz Boulevard, the central boulevard in Tehran which connects the famous Vali Asr Street to the Vali Asr square, but not anywhere at the boulevard. I was at one of the famous “Chay Khouneh”. When the first of the Hijri month of Muharram comes around, Iran’s streets in all provinces become filled with these tents known as chay khouneh [literally the tea house]. Iran is familiar for traditional tea houses that serve fresh broiled tea with different types of sugar cubes or sticks.

But what makes the Ashura tea houses special is that they are set up to express love for Imam Hussein and these are tea houses that serve tea and sugar cubes for free to the congregations and the people across the country. These tea houses or tea tents are set up by the hey’at; a number of people who cooperate together as a group to carry out the event.

Some say these tents echo the tents of Karbala where Imam Hussein and his family stayed in the desert. Mourners assemble every night for ten days where they drink tea, water, and listen to the eulogies of sorrow known as “nohe”.

The tea houses are basically wooden polls covered with black textiles, and decorated with hand-embroidered material and religious art work that is sometimes passed down through generations. Of course the rituals and customs related to the commemoration can vary from one place to another across the country, especially since its people come from different ethnic groups and backgrounds.

Some tents also give out free food for the love of their religious leader Imam Hussein, who was killed thirsty in Iraq’s Karbala with his family members and friends.

Mohammad reza Aghapoor is the head of the Hey’at of “Qamar Bani Hashem” [literally meaning the moon of Hashem tribe which refers to Abbas, Imam Hussein’s brother whose hands were cut off by the Yazid army after several attempts to bring water to the thirsty children].

Explaining more about the concept, Aghapoor said “The philosophy of Imam Hussein and Ashura is a philosophy for everyone and is not inclusive to a certain people. Imam Hussein is our idol and role model. He was a free man of a free will who fought for a just cause and was martyred in Karbala. He did not seek personal interest or rule; he was trying to preserve Islam and prevent corruption and did not choose to go to war.”

Aghapoor said “After 1400 years, we the Iranians still pay respect to Imam Hussein and his brother Abu Fazl Abbas who are the role model for all the martyrs, the injured and the young and old alive people. This role model passes down generation after generation.”

Supervising the preparations, Aghapoor said that “The yearly mourning, the tea houses, the food tents and all other activities are practices that keep Ashura alive along with the belief that we are here to be good people who seek no greed and no selfish interests.”

“And by the way, these rituals are directly related to ethics and manners and therefore are a matter of interest of all humankind,” he explained.

In that tent, which exemplifies the thousands of tents across Iran, big tea pots, trays of little tea cups and water containers were set in place, while the group was trying to finish everything before the next day.

The head of the Hey’at, who has been heading it for around 20 years now, assured that Imam Hussein and Islam are not for an exclusive group of people. “When we say Imam Hussein, or when we mention Islam, we basically and in first place talk about manners, humane ethics that do not belong to Muslims alone.”

Ashura rituals are an integral part of the Iranian culture. Aghapoor also pointed out that “The tea houses and food tents that serve the people for free are not only run by Shia Muslims in the country, but rather by all people including other Muslim sects, Christians, Zoroastrians and Jews. As a matter of fact, they have a strong belief in these heroes and take them as role models too.”

A question was still lingering in my mind on whether these tea houses were state-funded or not. Aghapoor explained that the concept is merely popular and is a community effort. “The tea houses are financially funded by its manager and the Hey’at members in general. But people also give ‘Nazri’, amounts of money that they pay willingly to express love and pay the pledge to Imam Hussein. It is sort of a community spontaneous thing as soon as the days of Muhharam are about to arrive.”

The Hey’at members, who were working non-stop until the late night hours like Aghapoor assured that tea houses and other practices in Iran only require love, the love of Imam Hussein.

“What makes Ashura so special is the universality of the experience. The communitarian grief, the historical commemoration, is something many of us can understand. It’s something many of us have publically participated in after local or national tragedies. But Ashura, I believe, has no other comparable tragedy in world history. No man throughout history has been deprived along with his family members and friends of water for ten days, witnessed all his family members and friends get killed and disfigured, and seen with his own eyes his little infant get killed and at the end get brutally killed himself.

The mourning process of Ashura has taken on different ritual manifestations. Public mourning – has been enacted virtually everywhere in the world at one point or another. Publically commemorating the lives and mourning the loss of historically significant figures is something many people do, and they do it with their communities. Tea houses remain to be one of the fixed and important mourning processes in Iran.

According to the Shia Muslim narration, no more than 50 years had passed since the death of Prophet Muhammad [the last Prophet of Islam] and the Muslim Empire was sliding into corruption under a tyrant from the Ummayad dynasty, Yazid.

Hussain ibn Ali, the grandson of Prophet Muhammad took a stand against Yazid’s illegitimate rule. Whilst Yazid was in equal parts feared and despised for his ruthlessness, Hussain was admired and respected by society at large. Mindful of this, Yazid decided that he would demand Hussain’s allegiance, hoping to gain some form of legitimacy for his inherited rule.

Hussain had a choice to make. To endorse Yazid would no doubt mean a handsome reward and a life of luxury. To refuse would invariably lead to his own demise. For Hussain the choice between the easy thing and the right thing was no choice at all.

Imam Hussein refused and said: “I will never give Yazid my hand like a man who has been humiliated, nor will I flee like a slave… I have not risen to spread evil or to show off… I only desire to enjoin good values and prevent evil.”

Imam Hussein’s family members and companions were all killed after refusing to pay pledge to the corrupt ruler. He too was killed mercilessly, yet, according to Shia belief, he died holding on firmly to his principles.

Today millions of people pay homage to Hussain ibn Ali for his stand and annually mourn the tragic Battle of Karbala. Also, pilgrims from all walks of life visit the Imam Hussain shrine to pay their respects in the city of Karbala, Iraq.