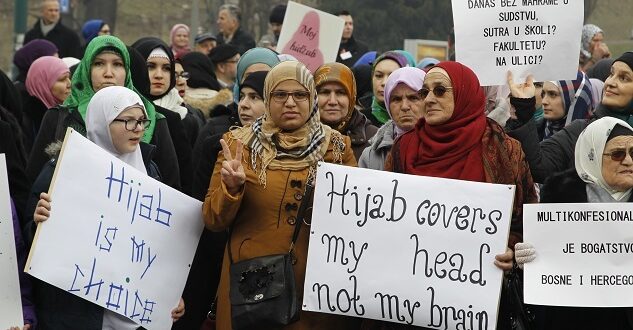 The Court of Justice of the European Union has sparked outrage among Muslim communities after it ruled Tuesday that employers can prevent their workers from wearing religious symbols, including headscarves worn by certain Muslim women.

Turkish Prime Minister Binali Yildirim slammed the ruling saying that there was nothing acceptable about the decision, during an interview aired live on HaberTurk, Bloomberg HT and Show TV.

“This is so wrong. There is nothing acceptable about this [decision]. It is against the human rights, freedom of belief and freedom of dress,” Yildirim said.

In Germany, the Central Council of Muslims in Germany also sharply criticized the ruling, saying it was in contradiction with the basic freedoms guaranteed under the major European conventions on human rights.

“With their decision today the judges of the Court of Justice of the European Union have opened the door for further discrimination of Muslim women in Europe and they have further restricted the legal options for objecting such discriminatory measures,” the council said in a press release.

Bekir Altas, secretary general of the Islamic Community of Milli Gorus, one of the largest organizations of the Turkish-Muslim community in Germany has also condemned the court ruling.

“The ruling of the Court of Justice of the European Union is a wrong decision. Moreover it is open to misuse,” he said.

Altas warned that following this ruling, more Muslim women would be further excluded from the labor market and lose their opportunity to gain their economic independence.

“This is an unacceptable situation. Politicians should immediately take necessary steps in the parliament to introduce measures to strengthen the struggle against discrimination,” he added.

Bekir Alboga, secretary general of the Turkish-Islamic Union for Religious Affairs (DITIB) said the right of Muslim women to wear the headscarf should be respected by all, as religious freedoms are protected by the German constitution.

The Court of Justice of the European Union ruled on Tuesday that employers can ban their workers from wearing any religious symbol, including headscarves worn by certain Muslim women.

In a ruling on two separate appeals made by Belgium and France over the headscarf ban, the court said companies could bar staff from “visible wearing of any political, philosophical or religious sign”.

The EU court further said the decision to ban such symbols at workplaces was not discriminatory.

Yacef said in Brussels the decision would “effectively” keep away all Muslim women wearing a headscarf from the workplace.

In Turkey, Deputy Prime Minister Numan Kurtulmus joined the premier in describing it as a “disgrace” in an interview with CNN Turk.

“This cannot be acceptable. The decision which does not comply with any standards of Europe, with any humanitarian values and freedom of human is a disgrace,” Kurtulmus said.