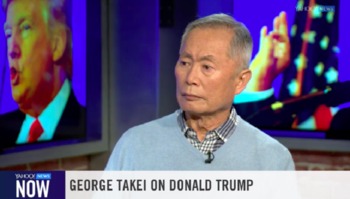 We must stand up for Muslims in US: Japanese-American Actor

Japanese-American Actor and Activist George Takei hopes his own story of being sent to a Japanese internment camp as a child will motivate others to stand up for Muslim Americans in an era of US President Donald Trump.

Recently, Takei created an online petition, calling for people to stand up in support of Muslim Americans in the face of President-elect Trump, who appears to be standing by his plans to impose a temporary ban on immigrants from “certain” Muslim countries and to create some sort of database of Muslims, Yahoo News reported.

“It starts with a registry, with restrictions, with irrationally ascribed guilt, and with fear,” reads the petition. “But we know well where it might lead.”

The petition had garnered more than 80,000 signatures when its opened recently
The Japanese-American actor, best known for his role in “Star Trek,” was five years old when he and his family were taken from their Los Angeles home at gunpoint to an internment camp. He recalled gazing out the front window with his brother as their parents packed their belongings in another room and spotting two soldiers marching up the driveway with rifles in tow.

When the soldiers banged on the front door, the “sound reverberated through the house,” Takei, now 79 years old, told Yahoo News and Finance Anchor Bianna Golodryga.

“I will never be able to forget that moment. It was terrifying for me,” he added.

Four years later, when the war ended, the terrors of internment continued to haunt Takei and his family, as they’d been left impoverished and were forced to find a home in downtown Los Angeles’ notoriously crime-ridden Skid Row.

“Coming home was horrific. They took everything from us,” said Takei. “We thought behind those barbed wire fences was better than life on Skid Row.”

As an adult, Takei became determined to prevent anything like the internment of Japanese-Americans during World War II from happening in the United States again. His story became the subject of the musical “Allegiance,” which will soon be making its way from Broadway to movie theaters. So when he first heard then-presidential candidate Trump call for a ban on Muslims to the United States, he said, “It was chilling.”

“That was what happened to us,” Takei told Golodryga. “Overnight after Pearl Harbor, we were characterized as the enemy. We were looked at with fear and suspicion and outright hatred.”

By suggesting that Muslims “are all potential terrorists,” Takei argued, Trump had done the same thing “with an entire faith group.”

Takei argued that Trump’s escalating battle with the media including a recent tweet in which the president-elect referenced alleged intelligence leaks and compared America to Nazi Germany is an example of the “failure of political leadership.”

“There are cattle that will buy that kind of leadership,” Takei said. “Trump’s got his following, and that’s where democracy is in danger.”

Now more than ever, Takei said, he hopes his own story of internment will help others “learn from that shameful chapter in American history” and “show solidarity with the Muslim American community.”

Internment “was a costly waste of money on innocent people who were damaged severely, and some didn’t survive that damage,” he said. “We don’t want to see that repeated ever again in the U.S.”