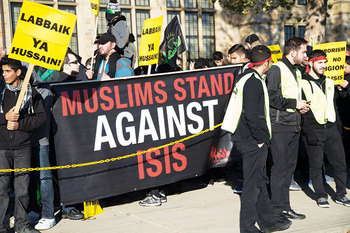 Story of ‘Hussain unites us campaign’ during Ashura in Dearborn, Michigan

Muharram, the first month of the Islamic calendar, held the martyrdom of Hussain (the Prophet Muhammad’s grandson) in the battle of Karbala. Mainly Shi’a Muslims commemorate his and his family’s “valor and sacrifice” for the first nine nights of Muharram by recounting segments of their story until the 10th day— Ashura— the day the imam was martyred.

On the morning of Ashura, an Islamic scholar narrates the full battle of Karbala and a procession usually follows right after or a couple days after to spread the imam’s philanthropic message for the human race.

Last year, many mistakenly believed the march supported ISIS because of the black flags— which indicate mourning— being displayed, but it is in no way related to such terror. Imam Hussain fought a corrupt militant group that held a similar ideology to ISIS in the battle of Karbala, sacrificing his life to rid the world of inhumanity and tyranny.

We spoke with two humanitarian organizations enthused by the teachings of Imam Hussain and his family to assist anyone in need— no matter the difference in beliefs or background.

The Ashura Project and Who is Hussain.org both hold food drives, charity events and other activities for the youth in hopes of spreading the message of compassion and unity. Who Is Hussain in Michigan has donated 70,000 water bottles to Flint residents, which made international news.

Both organizations also hold lectures and processions every year to commemorate the heroes of Karbala and share the humanity they’ve learned from their story.

Two organizers from The Ashura Project explained how the group took the initiative to avoid black flags last year, so there were no misinterpretations. Still, they said it is hard to stop the participants from bringing their own when there are around 4,000 people marching.

“From our side, we didn’t use black flags,” Mohamad Awada said. “If the people who participated were using some of the flags, you can never stop them, especially if you have a procession of 4,000- 5,000. You can never force each one to take down the flag during the procession itself, but you could do so much from your end.”

The organizers said the prominent banners in the processions every year are messages promoting justice in English — whether it’s against ISIS, racism or police brutality — which allows non-Muslims to relate to the cause for which they’re marching.

“They have different messages, against ISIS, against injustice and that’s all evident in the videos,” Hassan Bazzoun said. “Imam Hussain was the first person to fight and sacrifice his life against the ideology that ISIS carries today.”

Also, Awada and Bazzoun clarified that the black flags participants bring with them solely indicate mourning.

Awada added that they consult with different Islamic scholars, so the organization is not tied to any mosques or centers but is rather an independent entity for the community. He said the scholars who are invited to speak at their nightly programs every year also speak at the procession.

Recently, The Ashura Project produced a billboard displayed on Ford Road that includes portraits of everyday people along with the saying, “Hussain unites us.”

“Imam Hussain’s message was a message to humanity, rather than specifically to Muslims,” Bazzoun said. “The characters who were with him resembled that. You got somebody from Africa, you got somebody who is originally non-Muslim and you got people who came from different social backgrounds. One of them was a big merchant and another was a former slave. There were women, children, young, old, elderly men even. There were fathers, sons, daughters… It relates to everybody on the human level.”

He added that the billboard’s purpose is to demonstrate that regardless of all the sectarianism, hatred and prejudice around the world, people unite as human beings and that the imam is a man who signified that unity.

The organizers also said the Dearborn Police department loved the message the procession stressed. Ashura Project officials told police that it represents the man who fought against an evil ideology, supports his opposition to oppression and demands justice.

The fourth annual Ashura procession, “March for Justice”, is set for Sunday, October 9, at 9:30 a.m., starting off at Fordson High School’s parking lot and ending at Ford Woods Park. Community leaders will speak to the participants about the injustice of this day and age at the park.

According to both a non-Muslim and a Sunni Muslim, in a time of such war and hatred, “Hussain unites us.”

DaVonna Jackson, a Christian volunteer for Who is Hussain.org, said she came across the group at Marygrove College when one of her friends asked her if she could take photos.

“I started off taking pictures for different events at Marygrove’s ‘Who is Hussain?'” she said. “They had little pamphlets about Hussain… how he was just so giving and so loving. The message was kind of like Christianity— love and sacrifice— so I really enjoyed his message.”

Jackson started volunteering with the group at food drives, charity events, homeless shelters and more. She said the differences between Christians and Muslims did not matter to her, but that the man and the message he embodied did.

“I was inspired,” she said.

Aman Agrawala, a Sunni Muslim volunteer at Who is Hussain, said the imam’s message is a universal one.

“I am Sunni,” he said. “I actually didn’t know too much about Hussain growing up, but in college I had two Shi’a roommates. And as I got to talk to them and get to know more about Shi’a Islam and Sunni Islam… His message resonates with me.”

Agrawala elaborated on how many groups, like African Americans, Palestinians and others struggle against oppression every day, but most of the time people keep quiet.

“They think the system will change itself,” he said. “Whereas, looking at Imam Hassan (brother of Hussain) and Hussain they recognized injustice was there and fought against it. I think that’s something we need to remind everyone. It doesn’t matter what religion you follow.”

Dr. Aziza Askari, head of Who Is Hussain in Michigan, said that one of the main goals of the organization is to change perceptions and invite dialogue.

She said carrying banners and flags with messages in English and other languages allows everyone to understand and be willing to ask questions if they don’t understand.

“We have more than 80 representatives across all the continents,” Askari said. “So what we are doing now is basically talking to people in their language.”

She added that the website can be accessed in English, French, Dutch, Swahili and Arabic.

Askari also said the organization is a humanitarian one with two missions: To raise awareness about Imam Hussain and to inspire acts of compassion through his teachings. She also highlighted that building a community based on those acts is what the world needs since every religion agrees on humanity.

“We need to make sure that everybody is being inspired,” she said. “Imam Hussain is not just for Middle Eastern Arabs, not for people of one region. He carries a universal message of peace, social justice and equality.”

Who is Hussain in Michigan is currently holding awareness booths at all main universities in Michigan.