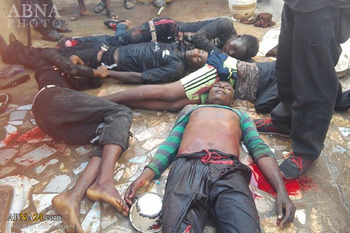 Graphic images appeared to show at least three women among the bodies of those martyred in the clashes in the town of Funtua, in the north-western Katsina state.

Heavily-armed troops in a convoy of 18 armored vehicles surrounded a gathering of mourners in Kaduna as an ambulance waited nearby, UK-based Islamic Human Rights Commission (IHRC) said in a statement.

A local newspaper said the standoff was at the residence of senior Shia leader Muhtar Sahabi. It said armed soldiers and mobile police officers surrounded the compound and were waiting for those gathered inside to leave.

An eye witness to the clashes told BBC News the army and police had tried to block the procession, which commemorates the martyrdom of Imam Hussein, a grandson of the Prophet Mohammed.

He said police then opened fire on the crowd, and while he had seen only eight bodies, many more were feared wounded.

Islamic Movement center in Jos under attack Information coming from Jos-firing shooting on Sheikh Adamu Tsoho’s resident Himself and the members of the family are trapped.

Share
Previous 5 Christian tourists convert to Islam
Next Story of ‘Hussain unites us campaign’ during Ashura in Dearborn, Michigan