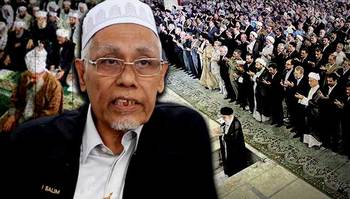 Malaysian Mufti: Shiites are Muslims despite diff with Sunnis

Quoting a hadith of Prophet Muhammad, he said as long as a Muslim prayed the same way facing the direction of Mecca, they should be considered as part of the Muslim community.

“Thus, we cannot declare them apostates or deviants,” he told FMT, in comments which contrast with the official stand by Islamic authorities in the Malaysia, who consider Shias as deviants.

Wan Salim’s comments come in the wake of a seminar in Kuala Lumpur on Shia-Sunni ties organised by the Islamic Renaissance Front last week, where several Muslim scholars spoke out against the tendency of some Muslims to label others as deviants.

Malaysian Muslims are predominantly Sunni and subscribe to the Shafi’i school of thought.

The National Fatwa Council had in 1996 declared Shia Islam as deviant and prohibited Malaysian Muslims from practising it.

Religious officers in the past have arrested Shia Muslims

Shias differ from Sunnis on several historical aspects of early Islam, including on the rightful successors to Prophet Muhammad.

Sunni Muslims on the other hand recognise the first four caliphs as rightful inheritors of the Prophet.

Recent developments in the Middle East, such as the armed conflict in Syria, have led to increased friction between the two largest Muslim sects, with Shia Muslims being the target of violent attacks by extremist Sunni militants (Wahhabi/Salafi) in Pakistan.

Shias are also a target of the militant ISIS group, whose leaders subscribe to the Wahhabi strain of Islam, a purist movement from the Arabian peninsula which also opposes traditional Sunni teachings they consider as heretic.

Wan Salim said the tendency to label other Muslims as apostates could lead to violence and would not benefit Muslims.

“It will benefit the enemies of Islam. Which is why we shouldn’t simply dismiss certain quarters as apostates. Somehow it is only we who are preoccupied with such divisions.”