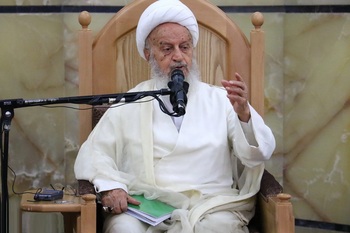 Speaking at his Kharij-e-Fiqh course in Qom’s Grand Mosque, Grand Ayatollah Makarem Shirazi referred to the Wahhabi Muftis’ recent Fatwa in which they called Iranians ‘non-Muslims’ and added,” The Islam of Muhammad ibn Abdullah (PBUH) is different than that of Muhammad ibn Abdulwahhab’s, the founder of Wahhabism since there are three main differences between the real Islam and Wahhabism; the first one is Wahhabis’ cruelty and violence which is absolutely against the genuine teachings of real Islam, the Wahhabis commit any kind of crimes in cold blood,”

The Shia source of emulation went on, “The second difference is that we believe all those who confess their Declaration of faith are considered as people of religion, as religious brothers and sisters, but the Wahhabis call all those who do not follow their ideology infidels,”

“The third point is that Islam recommends maintaining friendly relationships with those Muslims who do not seek hostility toward you; the holy Quran has recommended it strongly, yet the Wahhabis go on to sell Muslim girls in markets as slaves,” Hawzah quoted ayatollah Makarem as saying.

The senior Shia cleric further said, “Wahhabism does not equal Islam, thankfully the Sunni clerics announced in Chechnya that Wahhabism is not an Islamic sect; the same way we, Shias, do not consider Wahhabis as Muslims and that proves the false origin of Wahhabism which has nothing to do with genuine Islam,”

“Fortunately, the Wahhabis’ fall has begun and the world is already recognizing their true identity; it does not matter what the Wahhabis think of Iranians,” Ayatollah Makarem concluded.