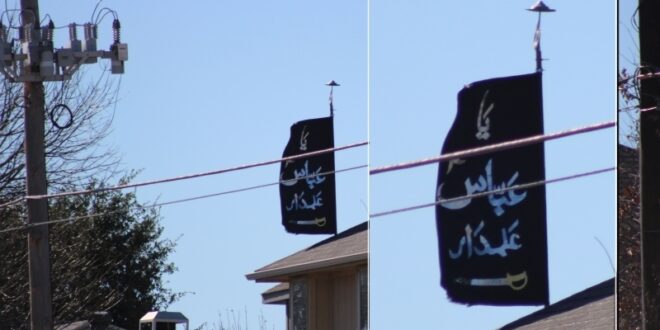 LEWISVILLE, Texas – The First Amendment protects the right to religious freedom and to freedom of speech, but what happens when your right to do either is threatened? Police informed a Lewisville (city in Texas, US) family that a man threatened to vandalize their property, instilling concerns for their well-being.

The mother of the family in turn asked the officer to help her take her religious flag down Sunday morning. The flag flew as a visible symbol of the family’s Shiite faith, a sect of Islam. Contrary to the assumptions of accusers, it is not an ISIS flag.

“‘Just take it down. Just to be safe, take it down,’” Nisa Rizvi said of her mother’s response to the Facebook threat. “There’s crazy people out there.”

Rizvi said she felt if terrorizers opened a book or did the research, then they would know the flag does not relate to ISIS. She said nobody has ever directly approached the family and made threats because of the flag but people have asked out of curiosity the flag’s meaning.

The flag that flew says in Arabic “Ya Abbas Alamdar,” which translates to “Oh Abbas, standard-bearer.” In the Battle of Karbala in 680 A.D., Abbas, or Abbas ibn Ali is believed to be the grandson of the Prophet Mohammed, and is revered by Shia Muslims as a martyr in the battle of Karbala in the late 7th century. He carried the standard, or flag, and was martyred while trying to bring water to his camp. His death is generally commemorated by Shiite Muslims.

The sword is said to symbolize Zulfiqar, the name of the sword carried by Imam Ali, who was Abbas’ father and Mohammed’s son-in-law. Shia Muslims regard Imam Ali as the first imam. The color black is said to be a symbol of mourning.

Captain Mike Moore said a citizen called the police department around 11 a.m. Sunday to report the threat made. Officer Chris Loughry went to the home to advise the family of the threat.

“[The mother] stated that she’s a single parent with two children and is more concerned that this person or someone else will come to the house or go after her family,” Moore said.

She said she would take the flag down but was unable to do so on her own and asked the officer to help her remove it, he said. She was advised that her concern was valid but also that she did not have to take the flag down because it is her property.

“The officer assisted in removing the flag for the resident and advised her that officers would close-patrol the area due to the threat being phrased as imminent,” Moore said.

“A threat is a threat no matter how it’s communicated,” Moore said, “whether it’s social media, whether it’s a letter, whether it’s verbally, in person, we will definitely investigate.”

The officers who informed the family asked them what they would like the officers to do regarding the the man who made the threat. The mother said she did not want any trouble and did not want the police to do a thing, Moore said.

“They believed it would make it worse if we were to kind of poke and prod around the guy who did it, so we never did follow up with that guy and he never made any more posts,” he said.

The officers stressed to the family that if they would like to file a charge or have LPD investigate it, it could be done, but they did not wish to do so, Moore said.

Rizvi said the family has temporarily taken down the flag until everything possibly blows over. She said she doesn’t think anybody will act on the threats.

“You can sit behind a computer screen and say anything you want, right? I feel like they don’t really have the guts to come down, because if they did they’d be here by now, you know?” Rizvi said.

The Lewisville Texan Journal reported the online concerns of the flag in 2014. Since then various outlets have regurgitated LTJ content into clickbait for ISIS accusers. We have chosen not to support the ad revenue of these sites by sharing their links.

Share
Previous It’s high time to react: Is Sheikh Zakzaky not a human being?
Next Top Malaysian Sunni official: Wahhabism has no place here, they split Muslim society