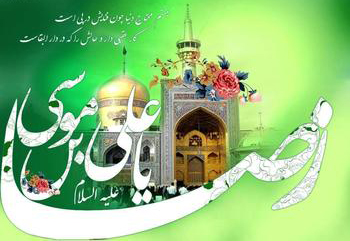 His blessed name: Ali
His father’s name: Imam Mūsā b. Ja‘far (A)
His mother’s name: Najma or Tuktam
His nickname: Abū al-Hasan
His cognomen: Reza
Date of birth: Dhu’l-Qa’ada 11, 148/Dec 29, 765
Place of birth: Holy city of Medina
Progeny: His holiness Imam Muhammad Taqī (A.S.); of course, it is disagreed whether his holiness has had other children.
Rulers of his time: Mansur Dawāniqī, Mahdī ‘Abbāsī, Hādī ‘Abbāsī, Hārūn al-Rashīd, Muhammad Amīn, Ma’mun ‘Abbāsī
Date of being appointed as heir apparent: Ramadan, 201/March, 817, as imposed by Ma’mun
Length of life: 55
Date of martyrdom: the end of Safar, 203/September 5, 818
His murderer: Ma’mun ‘Abbāsī, through poisoning
His mausoleum: Holy city of Mashhad, as known worldwide.

He is Ali son of Mousa son of Ja’fer son of Muhammad son of Ali son of al-Husayn son of Ali son of Abu Talib (A.S.), eighth in the series of the Emams belonging to the Ahl al-Bayt (A.S.). His birthplace is Medina, and his resting place is Toos (Iran).

Historians disagree a great deal about the year of his birth and even in determining the month as well, and they also disagree about determining the year and the month of his death. Their disagreements are not confined to the limit of a short span of time but they may be five years apart, and the disagreement is so confusing that it is very difficult to determine clearly such matters; however, we shall point out the statements recorded in this regard without favouring any of them due to the lack of purpose of such favouring which naturally requires research and investigation and a proof for selecting what seems to be the most accurate.

Disputes exist also regarding the number of his offspring and their names. A group of scholars say that they were five sons and one daughter, and that they were: Muhammad al-Qani’, al-Hassan, Ja’fer, Ibrahim, al-Husayn, and ‘Ayesha.

Sabt ibn al-Jawzi, in his work Tadhkiratul-Khawass, says that the sons were only four, dropping the name of Husayn from the list. Al-Mufid inclines to believe that the Emam did not have any son other than Emam Muhammad al-Jawad (A.S.), and Ibn Shahr Ashoob emphatically states so, and so does al-Tibrisi in his A’lam al-Wara. Al-‘Udad al-Qawiyya states that he had two sons, Muhammad and Mousa, and that he did not have any other offspring. In his claim, he is supported by Qurb al-Asnad in which the author says that al-Bazanti asked al-Rida, “For years I have been asking you who your successor is and you keep telling me that it is your son even when you had no son at all, but since God has now blessed you with two sons, which one of them is he?” ‘Uyoon Akhbar al-Rida indicates that he had a daughter named Fatima.

We are not in the process of investigating, researching and pinpointing with accuracy the number of his offspring and their names, but what seems to be more reasonable is what al-Mufid states. What is established as a fact with us is that Emam Muhammad al-Jawad (A.S.) was his son; as regarding his other sons, nobody seems to be able to prove any facts regarding them, and God knows best.

The wisdom in this argument is that should falling into error be accepted and expected from the Prophet (S.A.W.) or the Emam, then doubt will result regarding the reliability of what they convey to people of jurisdic rules and regulations and other such matters since they are liable to err in their judgement or get confused about a particular issue. Although the believers are not held accountable for doing what they are not supposed to be doing due to such error of judgement, the assumption of the error of judgement itself collides with the very wisdom behind the reason why prophets were sent to people at all which is to clarify to people, according to the way God Almighty intended them to, without any error or confusion, what His Will is.

The topic of infallibility is a vast one the discussion of which has no room here and which requires a dedicated research I may be able one day to tackle. What I have to same fa here is that Emamate is characterized by certain distinctive aspects such as infallibility which we cannot discuss by itself with others except after both parties agree on the basis from which it emerged; otherwise, our case would be like one who discusses the necessity of performing the ritual prayers (salat) with someone who does not believe in the message of the Prophet (S.A.W.).

Pages: 1 2 3 4 5 6 7 8
Share
Previous Analysis: Does Islam have a violence problem?
Next Iran Ready to Dispatch over 2mln Pilgrims to Iraq on Arbaeen: Official