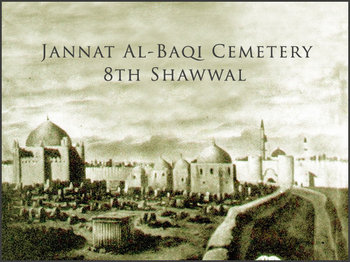 ;Anniversary of the destruction of the Jannatul Baqi by Ale-Saud

The demolition of Jannatul-Baqi (Baqi cemetery) on 8 Shawwal,1345AH (April 21,1925) at the hands of Al-e-Saud was a great tragedy in the history of Islam.

Jannat-ul-Baqi is simply a graveyard but Muslims all over the world attach it a high importance because it is situated in Madinat-ur-Rasool Where besides great companions of prophet Muhammad (p.b.u.h)his infallible progenitor Imam Hasan Ibn Ali (2nd Imam), Imam Ali Ibn Al-Husayn (4th imam), Imam Muhammad Ibn Ali (5th imam), & Imam Ja`far Ibn Muhammad (6th imam), peace be upon them, are buried.

In the same year (1925), King Saud bin Abdul Aziz also demolished the tombs of holy personages at Jannat al-Mualla (Makkah) where the Holy Prophet (s)`s mother, wife, grandfather and other ancestors are buried.

According to some scholars what is happening in Hijaz is actually a conspiracy plotted by the Jews against Islam, under the guise of Tawheed. The idea to eradicate the Islamic legacy and heritage as well as to systematically remove all its vestiges was with the purpose to alienate Muslims from their history and pious personalities who have been torch-bearers to lead them to Right Path.

Even today this devilish plan is being implemented through ISIL in Iraq and Syria. The world has already heard that the pious shrines of prophets Yunus and Shish,peace be up on them have been desecrated and then demolished by ISIL or so-called Daish. The pious tombs of great companions of prophet Muhammad (p.b.u.h) such as Ammar bin Yasir and Hujar bin ODAI have been demolished by the notorious ISIL in Syria. This notorious group namely Daish which is the mercenary of Saudi Arabia, the number one lackey of USA and the Zionists in the region is intermittently attacking the the great shrine of Hazrat Zainab, the grand daughter of prophet Muhammed (p.b.u.h) and the sister of the leader of the martyrs Imam Hussain (A.S).

Literally “Al-Baqi” means a tree garden. It is also known as “Jannat Al-Baqi” due to its sanctity, since in it are buried many of our Prophet`s relatives and companions.

The first companion buried in Al-Baqi was Uthman Ibn Madhoon who died on the 3rd of Sha`ban in the 3rd year of Hijrah. The Prophet (s) ordered certain trees to be felled, and in its midst, he buried his dear companion, placing two stones over the grave.

On the following years, the Prophet`s son Ibrahim, who died in infancy and over whom the Prophet (s) wept bitterly, was also buried there. The people of Madina then began to use that site for the burial of their own dead, because the Prophet (s) used to greet those who were buried in Al-Baqi by saying, “Peace be upon you, O abode of the faithful! God willing, we should soon join you. O` Allah, forgive the fellows of al-Baqi”.

The site of the burial ground at al-Baqi was gradually extended. Nearly seven thousand companions of the Holy Prophet (s) were buried there, not to mention those of the Ahlul Bayt (a). Imam Hasan Ibn Ali (a), Imam Ali Ibn Al-Husayn (a), Imam Muhammad Al-Baqir (a), and Imam Ja`far Al-Sadiq (a) were all buried there.

Among other relatives of the Prophet (s) who were buried at al-Baqi are: his aunts Safiya and Aatika, and his aunt Fatima Bint Al-Asad, the mother of Imam Ali (a). The third caliph Uthman was buried outside al-Baqi, but with later extensions, his grave was included in the area. In later years, great Muslim scholars like Malik Ibn Anas and many others, were buried there too. Thus, did al-Baqi become a well-known place of great historic significance to all Muslims.

Al-Baqi as viewed by historians

Umar Ibn Jubair describes Al-Baqi as he saw it during his travel to Madina, saying “Al-Baqi is situated to the east of Madina. You enter it through the gate known as the gate of al-Baqi. As you enter, the first grave you see on your left is that of Safiya, the Prophet`s aunt, and further still is the grave of Malik bin Anas, the Imam of Madina. On his grave is raised a small dome.

In front of it is the grave of Ibrahim son of our Prophet (s) with a white dome over it, and next to it on the right is the grave of Abdul-Rahman son of Umar bin Al-Khattab, popularly known as Abu Shahma, whose father had kept punishing him till death overtook him. Facing it are the graves of Aqeel bin Abi Talib and Abdullah bin Ja`far Al-Tayyar. There, facing those graves is a small shrine containing the graves of the Prophet`s wives, following by a shrine of Abbas bin Abdul Muttalib.

The grave of Hasan bin Ali (a), situated near the gate to it`s right hand, has an elevated dome over it. His head lies at the feet of Abbas bin Abdul Muttalib, and both graves are raised high above the ground, their walls are paneled with yellow plates and studded with beautiful star-shaped nails. This is how the grave of Ibrahim, son of the Prophet (s) has also been adorned. Behind the shrine of Abbas there is the house attributed to Fatima, daughter of our Prophet (s), known as “Bayt Al-Ahzaan” (the house of grief) because it is the house she used to frequent in order to mourn the death of her father, the chosen one, peace be upon him. At the farthest end of al-Baqi is the grave of the caliph Uthman, with a small dome over it, and there, next to it, is the grave of Fatima bint Asad, mother of Ali b. Abi Talib (a)”

After a century and a half, the famous traveller Ibn Batuta came to describe al-Baqi in a way which does not in any way differ from the description given by Ibn Jubair. He adds saying, “At al-Baqi are the graves of numerous Muhajirin and Ansar and many companions of the Prophet (s), except that most of their names are unknown.”

Thus, over the centuries, al-Baqi remained a sacred site with renovations being carried out as and when needed till the Wahhabis rose to power in the early nineteenth century. The latter desecrated the tombs and demonstrated disrespect to the martyrs and the companions of the Prophet (s) buried there. Muslims who disagreed with them were branded as “infidels” and were subsequently killed.

Pages: 1 2
Share
Previous Alert at Islamic buildings as white powder and threats sent to three London mosques
Next Bahrain turning into a police state as vicious and arbitrary as Egypt