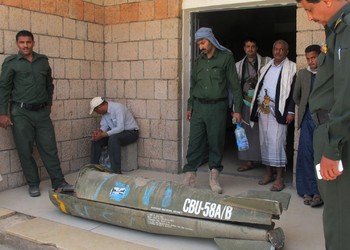 Washington has been playing a “quiet but lethal role” in Yemen through its persisting weapons sales to the Saudi regime, including the globally-banned cluster bombs, a report says.

In an article published on Saturday, the Washington Post exposed the US support for the Al Saud royal family in its war on the impoverished Yemeni neighbors.

“The United States is playing a quiet but lethal role in the killing and wounding of thousands of civilians in Yemen’s civil war,” it read.

Saudi Arabia has purchased billions of dollars worth American warplanes and other US-made weaponry in deals worth billions of dollars, and the Pentagon has provided the Saudi-led Arab coalition with training, aerial refueling support and intelligence as it continues to attack targets in Yemen, it added.

While detailing the massive extent of civilian toll of the Saudi bombardment in Yemen, the daily cited White House press secretary Josh Earnest as defending the Obama administration’s continued support for Saudi Arabia and other members of its military coalition, describing them as “effective national security partners.”

The report further pointed to growing criticism of Washington over its involvement in the war crimes being committed in Yemen by the Persian Gulf kingdom, noting that human rights groups and a number of US lawmakers have called for a ban on weapons sales to the Saudi regime, arguing that the Saudi air campaign have had “a devastating impact on civilians and violated international laws.”

According to the article, however, the White House quietly blocked the transfer of more cluster bombs to Riyadh in late May “in apparent concern about the humanitarian toll.”

Despite the effort, the US Congress voted last month “to continue selling the weapons to the kingdom, citing a desire not to stigmatize the munitions.”

This is while the Saudis are widely believed to possess significant amounts of cluster munitions, including some manufactured by Britain.

Since the Saudi military aggression against Yemen erupted in March 2015, American-made cluster munitions have been dropped on or near civilian populations on numerous occasions, according to rights groups.

Other American-supplied bombs, have also targeted Yemeni civilians. In March, two airstrikes killed at least 97 civilians, including 25 children, in a crowded market in the northwestern village of Mastaba, about 28 miles from the Saudi border.

This is while investigators of the US-based Human Rights Watch (HRW) reported finding remnants of a satellite-guided bomb made up of American-supplied explosives and other US parts, according to the report.

The daily also pointed to the rising anti-American sentiments across Yemen as the result of the evident use of US weaponry in the mass killings of civilians.