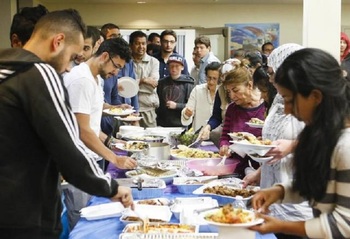 San Luis Obispo Muslims in California, USA on Friday celebrated one of the holiest nights of the year with serving iftar meal and engage in special prayers.

Members of the Mosque of Nasreen have gathered weekly for a community Iftar, or breaking of the fast, throughout Ramadan, but the final few nights are especially important.

The month of piety marks the time when the Holy Qur’an was revealed to Prophet Muhammad (peace be upon him). The Qur’an’s revelation is thought to have occurred on Lailatul Qadr (Night of Power) during the last 10 days of Ramadan; most likely on 27th night of Ramadan. Muslims at Mosque of Nasreen marked the celebrations, anticipating the blessed night on Friday.

Mousaab Abdallah, imam of Nasreen’s Mosque, said there are multiple reasons for fasting during Ramadan. It allows worshippers to be more reflective and aware while also giving them empathy for those who must go without food. “We starve the body to feed our soul,” he said.

Friday’s dinner brought many important elements of the holiday together: Community members laid out dinner and then went into a separate room to pray.

After prayer came food. Attendees filled their plates with salad, rice dishes, pizza and even cupcakes. Those breaking their fast started with dates and water no liquids are allowed during the day.

When the meal was finished, some of the devout planned to go to the mosque for more prayer.

Amina Assal, 16, said it’s sometimes hard to feel connected to an Islamic community in the United States, where Muslims make up less than 1 percent of all religious adherents, according to Pew Research Center data. Assal said Ramadan brings her closer to other members of her religion.

“(Fasting) is easier when you’re surrounded by people in your community,” said Aysha Mahmoud, 19. “It doesn’t make it as hard as it should be.”

“This is a month of peace, a month of nonviolence, withholding even the slightest amount of anger,” said Abdallah.

Violence has no religion, he added, and above all, there’s no religion that validates the killing of children.

“We just want to take our religion back,” Abdallah said.

He noted that he will be intensifying efforts to encourage Muslims to not insulate themselves and to reach out to the community.

He has personally tried to combat suggestions of targeting Muslims and banning Muslim immigrants by vlogging, or video blogging, on YouTube throughout Ramadan. The videos follow Abdallah through his daily life and provide explanations of Ramadan and Muslim traditions.

“It’s an attempt to express Islam,” he said. “It’s transparency.”

Despite the angry rhetoric that’s been directed at Muslims, Abdallah views it as an opportunity to tell others about Islam’s true, nonviolent nature.

“Honestly, I think Republican presidential nominee Donald Trump, did us a favor,” Abdallah said. “… He’s passed us the mic and put us on the stage.”