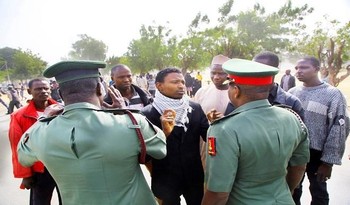 In the past few days we have received some intelligence reports dished out by the security agents insinuating that the Islamic Movement in Nigeria (IMN) is planning a coalition with the terrorist organization Boko Haram.

The intelligence report further indicated that due to the said ‘strategic alliance with Boko Haram, attacks will be carried out on military formations and other government buildings. Ordinarily we wouldn’t have even reacted to this latest ‘intelligence report’ had it not been due to the frequency with which the report is being peddled across the intelligence community, since we have in the past reiterated our stance vis-à-vis terrorism and terrorist groups.

However we distance the IMN from any attempt to associate it with violence and other militant activities. Sheikh Ibraheem Zakzaky, our revered leader has said it many times without number that:

“Our weapon is positive reasoning, truth and good conduct. Guns are for the reckless and foolhardy ones. We have been conducting our affairs peacefully, calling people to the truth for the last 36 years. So you cannot come overnight and attribute violence to us that we now resort to killing people. This is impossible. We save lives not kill them.”

This is the teaching of Sheikh Ibraheem Zakzaky for the past almost four decades, and we will not derail from that in the face of many provocations as wished by the Nigerian government and its security agents.

We hereby state categorically that there are no connections or any links whatsoever between the Islamic Movement in Nigeria and Boko Haram.

IMN in the first place is not the creation of any foreign security agencies, which is common with all the various terrorist groups globally. It was borne out of the desire of Muslims to live according to the teachings of Islam. IMN has been around at least in Nigeria for almost four decades now, with its various educational programs now commonly known in many Nigerian villages, towns and cities and with all its activities peacefully and transparently conducted.

Hence, there is no basis for any comparison with the Boko Haram that is a terrorist organization and a creation of global imperialism with the intention of tarnishing the image of Islam.

Moreover it is the same so called Boko Haram that bombed our brothers and sisters during an Ashura procession in Potiskum, Yobe state in 2014 and also sent suicide bombers to the Arba’een trek along Kano –Zaria highway killing many innocent people including women and children. It beats any sane imagination that IMN will now turn to the same group in what the intelligence agents term ‘strategic alliance.’

The IMN will like to reiterate its stance once again; we reject any violence or militant attack on anybody or any place in our name. We are not and will never become, act or relate with any terrorist group.

We make bold this statement because the history of security agencies the world over is known for false flag operations, Nigeria inclusive; where a violent attack will be carried out somewhere and innocent people will be accused of the crime. Islam is a religion of peace and is not associated with violence; therefore it is illogical to associate killings and violence to true followers of Islam.

In a related development, the Inspector General of Police, Director General of DSS and other bigwigs of the security agencies held a meeting wherein they deliberated on the need to crush the IMN once and for all before the month of Ramadan. According to them all efforts carried out to exterminate the Movement so far will come to naught if the annual Quds day rally is staged anywhere in Nigeria again.

In preparation for the grand onslaught on the IMN some Muslim Clerics have been commissioned to add momentum to their hate campaigns against Shia in all their preaching sessions. This treacherous act has already started in earnest in various mosques across the country. One of such Sheikhs on the payroll of the government was even heard saying to those around him, “leave them (Shiites) they will be finished off in the next two weeks.”

We will like to inform the public that, the Islamic Movement in Nigeria is at the receiving end of the evil machinations of the government. By now those who are opposed to any peaceful resolution of Zaria massacre by the military are seen clearly in their true colors.

Notwithstanding we will keep on pressing for our demands that, punishment be meted out on the military that unjustly and without due process killed innocent Nigerians who are followers of Sheikh Zakzaky from12-14 December, 2015 in Zaria. We still demand that our leader, Sheikh Ibraheem Zakzaky be released unconditionally, since after over four months the authorities have failed to accuse him of committing any crime.

MEDIA FORUM OF THE ISLAMIC MOVEMENT IN NIGERIA