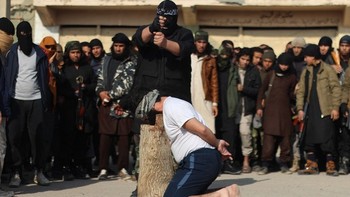 Extremists of the ISIS have executed 18 civilians in Iraq’s northwestern Mosul city on charges of spying for hostile groups, local sources reported on Thursday.

The ISIS-led Police had arrested the victims earlier on Tuesday after accusing them of spying for the Kurdish Peshmerga forces and Iraqi army.

The 18 young men, who have been convicted of “treason” by the Mosul Sharia Court, were executed in various ways.

“Eight of them were publicly beheaded in central Mosul, while ten others were burned to death inside a cage in front of hundreds of people,” media activist Abdullah al-Malla said in Mosul.

The source added that a state of panic spread among civilians in Mosul subsequent to the brutal executions.

“Innocent people are being convicted and punished on baseless charges,” al-Malla said.

Rights activist Saleh al-Ali said: “The brutality of ISIS militants against civilians has remarkable increased in the recent weeks, especially after Iraqi forces were able to hit security centers for ISIS in Mosul suburbs, besides the killing of a number of prominent ISIS leaders under airstrikes.”

“ISIS leadership believes that some locals are leaking security information about the group’s movements to its enemies. Arbitrary arrests and public executions have mounted, and every citizen is being deemed a suspect,” al-Ali reported.