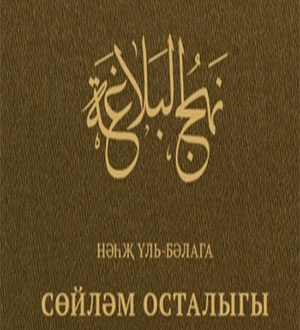 A Tatar translation of the third part of Nahjul Balagha, including the sayings (wisdoms and aphorisms) of Imam Ali (AS), was published by the Russian Islamic Studies Foundation in Ufa city of Russia.

According to the website of the Russian Islamic Studies Foundation, Mohammad Alam Mustafa, imam of the city’s Ikhlas Mosque, has translated this part of the book into Tatar.

The book was published in cooperation with Ikhlas Religious Foundation in Ufa and Qwais Qarni Wisdom Institute.

It covers 480 sayings of the first infallible Imam (AS) printed in 180 pages by Sadra Publication Institute in Moscow.

The scholar is also translating the two other parts (sermons and letters) of Nahjul Balagha into Tatar.

The foundation had published the first Russian translation of Nahjul Balagha by Abdul Karim Taras Chernienko.

The first edition of the book was published in 2007 by the House of Oriental literature affiliated to the Russian Academy of Sciences and the second and third editions of the work were published respectively in 2010 and 2015.

Nahjul Balagha or the Peak of Eloquence is an anthology of Imam Ali’s speeches, letters and aphorisms, compiled by famous Shia scholar Seyyed Radi in the 11th century A.D.