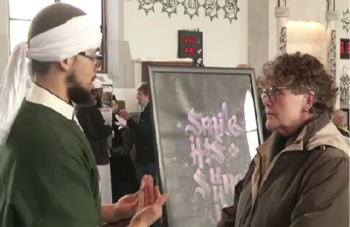 The Muslim Society of Buffalo in New York hosted an open house on Saturday to highlight the artistic works of the local Muslim community.

The event is part of the “Common Grounds” initiative spearheaded by the White House to help improve relations and dispel misconceptions about Muslim Americans.

The Muslim community is following the White House’s plan to introduce their faith to others, hoping to combat terrorism and anti-Islamic sentiments.

“It’s just a great environment to get people together talking and getting to know their fellow American Muslim neighbors on a human level,” says Hassan Shibly, a civil rights attorney.

US President Barack Obama recently visited the Islamic Society of Baltimore, his first mosque visit during his Presidency.

“When President Obama came he said that one thing that has to happen is there needs to be dialogue. There needs to be people who are going out to their next door neighbor who’s a Muslim and say, who are you, I’ve never met you, let’s break bread together. Let’s meet each other and that’s how we dispel all of those negative stereotypes and generalizations that we’re having now,” says Imam Michael Smith, from the Islamic Societies of Baltimore & Annapolis.

Dozens of people toured the mosque and listened to a brief presentation about women in Islam, Islamophobia and the rejection of radical Islam.

“We thought the best way to overcome the walls of prejudice and ignorance is to have this kind of open house where we can invite our fellow Americans to get to know us, where we can build relationships based on understanding, tolerance and mutual respect. To avoid this cycle of hate crimes and violence that we see happens when people don’t know each other,” Shibly said.

Organizers say they want to celebrate the contributions local Muslims have made to the Buffalo community and create a lasting relationship with their neighbors.