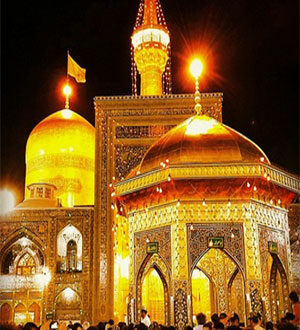 A Brazil university professor converted to Islam and Shi’ite in the Razavi Holy shrine and chose the name ‘Hussein’ for himself.

Dr. Batista Giumar, the Brazilian teacher of Japanese universities converted to Shi’ite in the Holy Shrine of Imam Reza (A.S.) by uttering Shahadatain (confession of faith).

“In searching for the meaning of life I pursued researches in this domain when I came to know Islam in which I found the reality of life”, he said.

“The lifestyle, belief to resurrection and the Hereafter are the most interesting issues over which Islam has illustrated elaborately and it was the main cause of my conversion to Islam”, Giumar said.

“The compassionate guides of an Iranian family and their answers to my religious questions were also very effective in my decision”, he reiterated.

“The opportunity of attending in Mashhad and the Holy Shrine of Imam Reza (A.S.) was very valuable for me and I was able to add to my information about Islam”, Dr. Hussein Giumar said.

Director of Non-Iranian Pilgrims Affairs of Astan Quds Razavi in the ceremony of conversion of the Brazilian pilgrim to Islam said, “Doing research about the divine religions is very important and accepting God and His religion is dependent on doing research and getting enough information in this regard.”

Sayed Muhammad Jawad Hasheminejad added, “The divine religions such as Islam and Christianity have many similarities in common but unfortunately, some people try to embroil the religions and put them against each other by causing division and disunion among them.”

“The Islamic revolution tried to remind the deprived nations that we have stood against the oppression and bullying”, said Director of Non-Iranian Pilgrims Affairs of Astan Quds Razavi.

“Such pure thoughts and valuable messages of the late Imam (R.A.) aroused the spirit of self-confidence, faith, and reliance on God in many countries”, he reiterated.

“We hope this attendance can provide the condition for further studies about the divine messages of Islam and the respected prophet (S.A.W.)”, Hasheminejad added.