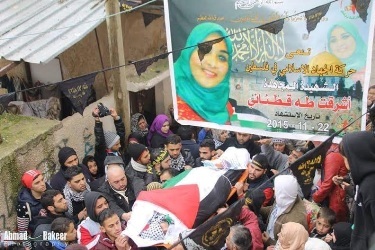 Palestinian Father: My Daughter Practiced Stabbing on Her Last Night

She is a beautiful Palestinian girl with a courageous and fervent spirit. She loved her homeland so she devoted herself for it. She refused to let it be forgotten so she exerted every effort. In her school she played a mobilization role that her friends talked about. She was in control of the radio in her school, and every national poem or statement she read made the audience cry. As for the knife revolt (Intifada) that the Palestinian youth initiated, she did not only support it, but even considered that “the end of the occupation is near, God willing…”

“The generation that you labeled as “Oslo generation” has proven to you that it is the son of this land and it will throw you out of this land, restore its dignity, and avenge for its free people…” she added, reassuring to the Zionists that “the response will be harsh on you, just wait to see it and fear the anger of the Palestinian.”

She is Ashraqat Taha Al-Qatanani, or Ashraqat Palestine (Palestine shined) as her father named her after her martyrdom. She is the 16-year-old girl who lashed the Zionists with these words to take only a couple of days later a knife from the kitchen of her house and head towards an Israeli checkpoint.

Ashraqat witnessed the occupation’s barbarism since she was a child, and had to bear responsibilities at a very early stage. Father of the martyr, Sheikh Taha Al-Qatanani recalled that during one of the occupation soldiers’ raids on his house “she was alone with her siblings so she stood up to the soldiers. I later gave her all my papers so she was in charge and looked after her siblings until morning.”

She loved the Gazans and sympathized with them. She was hurt for the burning of martyr Mohammad Abu Khdeir and Dawabsha family alive. So she expressed that on her Facebook page writing: “They burned the infant… damn a people that revolted for burning a murderous pilot but did not revolt for burning an infant… damn you… You are shameful to the religion of Mohammad (pbuh) and shameful to his morals.”

Ashraqat further considered that it was not the Zionists who burned the Palestinian infant, but the Arabs “since they abandoned the right of Abu Khdeir…”

With all this oppression around her, Ashraqat refused to stay hand folded. She took a brave decision and sacrificed her life for what she loved the most – Palestine -.

She took a knife from the kitchen of her house and headed toward an Israeli checkpoint to later be executed by an officer there. The story did not end here, for even after her martyrdom, Ashraqat had brave stances that were revealed.

This was what actually took place, and as a proud father, Sheikh Taha Al-Qatanani did not give in to any of the occupation’s conditions after the latter kept the body of Ashraqat for over a month and bargained over it.

As for her apparent love to Hezbollah Secretary General Sayyed Hasan Nasrallah, it was out of admiration for his firm stance and resistance against the Israeli enemy. She considered that Sayyed Nasrallah was the symbol of resistance and had deep faith in him to the extent that she “broke up with her fiancé after discovering that he did not like Sayyed Nasrallah” her father explains.

In brief, her one and only compass was Palestine. This is why she abandoned any form of factionalism and sectarianism and defended her cause.

“If you come to visit me… take off your sectarianism, racism, and political affiliation outside the door then come in,” she wrote.

Q1: First, why did you pick this name for your daughter?

Mr. Qatanani: This is a story from the old days when I was trying to memorize the Quran… While I was reading Az-Zumar chapter, I passed through the verse {And the Earth will shine with the Glory of its Lord…} I then decided that If I was blessed with a girl I would name her Ashraqat (shined). Thank God this happened, and I named my daughter Ashraqat to later complete this verse for me {… the Record (of Deeds) will be placed (open); the prophets and the witnesses (martyrs) will be brought forward and a just decision pronounced between them; and they will not be wronged (in the least)}. {Az-Zumar:69}

Q-2: What was your role in building this strength, firmness and resistance against the enemy in Ashraqat?

Mr. Qatanani: Ashraqat Palestine is the name I gave her after her martyrdom… she lived with me and suffered along with the rest of the family members from my constant detention by the occupation. She used to see the occupation soldiers beat me and used to yell at them to let me go… She used to visit me in the prison, grieve and cry, and wish she could hug me. She used to talk to me and discuss issues with me despite her young age. Back then, she was only eight years old. Friends or relatives who used to accompany my children during the visits – because their mother was not permitted to visit me – used to admire her speech and dialogue. Ashraqat Palestine used to argue with me, disagree with me, and dispute with me about everything. However, she inherited the love of the resistance and the love of Sayyed Nasrallah from me. She loved the people of Gaza. She sympathized with them and was occupied with them… She grieved over the burning of martyr Mohammad Abu Khdeir and Dawabsha family alive. She wished to visit Al-Aqsa and pray there. She insisted on me to take her there only a couple of days before her martyrdom, but I was prohibited from entering the holy city. Palestine was her whole concern.

Q-3: What did you learn from Ashraqat in her life and after her martyrdom? Did she grant you more strength or courage?

Mr. Qatanani: I don’t deny that Ashraqat Palestine inspired me to become more active. She burst the struggle stock inside of me … and maybe forced me to return to the choice of resistance. The best example on that was when an occupation officer – called Zakaria – raided our house one week after her martyrdom and told me “since you left prison you stayed away from resistance and the Islamic Jihad Movement… but after your daughter died you decided to return to the resistance”.

Q-4: Where did Ashraqat get all this love for Sayyed Nasrallah from?

Mr. Qatanani: I think it was from me… and from Sayyed Nasrallah himself, as he is a high value in resistance, sacrifice, redemption, and honesty… He is the master of the truthful promise.

We used to follow his speeches together… they remind me of her. A couple of days before her martyrdom, Sayyed Nasrallah was delivering a speech but I was sick so I went to bed early… She kept on insisting on me to get up and listen to the speech. Her sincerity could be recognized from her writings.

Q-5: Whom among the martyrs had a special influence on Ashraqat? Who were her idols?

Mr. Qatanani: I think the two martyrs who had a special influence on her were Mohammad Abu Khdeir and the infant Ali Dawabsha.

As for her idols, they were the international revolutionist Geuvara, poet Mahmoud Darwish, and most importantly Sayyed Nasrallah – May God protect him – as she considered him the symbol of resistance and a crown over her head…