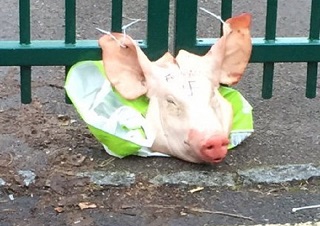 Pig head thrown outside Muslim school gate in Portsmouth, UK / Photo
Staff and students at the Madani Academy in Portsmouth, England suffered the fear and indignity of discovering a pig’s head attached to the school gates.

The pig’s head had a swastika; it mirrors an incident in December 2013 when a pig’s head was stuck on a spike outside the school. Some far-right groups (including the English Defence League and the South East Alliance) had protested the academy’s opening in August 2013.

Another Muslim school, this time in Blackburn, suffered the indignity of having pig’s heads dumped on its ground in December. Police have now made an arrest.

Pig’s meat was thrown at a Bristol mosque on January 17. Elderly worshippers faced verbal abuse as they left afternoon prayers. Avon & Somerset Police have charged four people in relation to the hate crime incident. And they will appear in court next month.

Some believe that dumping a pig’s head at the site of a proposed Islamic institution will damage the land or stop its completion.

The pig becomes a means to not just spread fear, but reinforce cultural hierarchies.

The idea that pork could subdue the ‘violent and fanatical urges’ of Muslims has sat in the cultural memory for a number of years.

Days after the murder of Drummer Lee Rigby, four men dumped a pig’s head on the grounds of Blackpool Central Mosque. They were later convicted in November 2014.

The Portsmouth case is not the only time a swastika has appeared on a pig’s head. As France grieved for the murder of cartoonists and Jewish citizens last January, some individuals sought to blame all Muslims. During the backlash, a pig’s head appeared outside a mosque in northern France.

In Slovenia, a country where Muslims make up just 2.4 per cent of the population, a pig’s head and blood were dumped at the site of a proposed mosque.

In a politicized move, parts of France are removing pork-free meals for Muslim and Jewish students. For some, however, the dumping of a pig’s head remains the visual means to express visceral disdain.

Share
Previous The Death Anniversary of the Lady al-Masouma (AS)
Next The Islamic Principles in Sermons of the Farewell Pilgrimage of the Holy Prophet (S.A.W.)